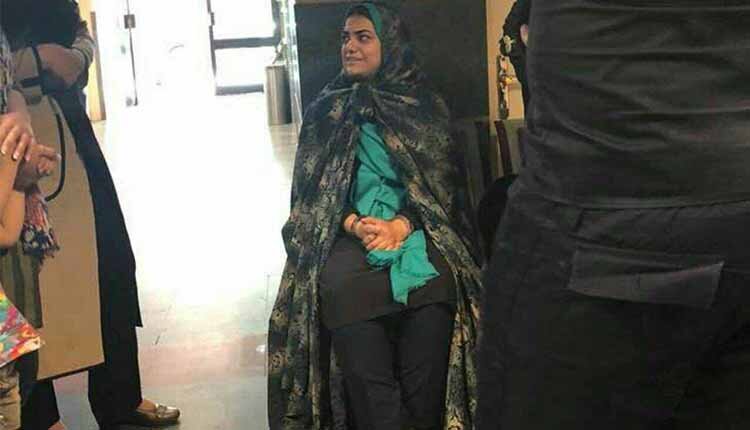 Sufi woman Maryam Farsiabi was tried by branch 15 of Tehran’s Revolutionary Court and sentenced to six months in prison and a two-year ban from traveling abroad.

Sufi woman Maryam Farsiabi was arrested during a crackdown on the protest gathering of Gonabadi dervishes in Tehran, along with her husband, Mohammad Karimaii, and hundreds of other dervishes. She was brutalized at the time of arrest as a result of which she suffered broken arms, and displaced jaw and spines.

Mohammad Karimaii has been sentenced to seven years’ imprisonment by Tehran’s Revolutionary Court.

After a vicious raid on Sufi women imprisoned in Varamin’s Qarchak Prison by the prison’s Special Guards, she accompanied five other women dervishes in their hunger strike for 16 days in protest to being ill-treated in jail.

In late July, two other Sufi women, Elham Ahmadi and Sedigheh Safabakht, were each sentenced to five years in prison. Ms. Elham Ahmadi has been banned for two years from leaving the country or having any social activities. Ms. Safa Bakhsh is banned from membership in any social or political party or group and from having any activity in the social media.

Two other Sufi women, Sepideh Moradi and Shokoufeh Yadollahi, have refused to appear in court to protest denial of lawyers to all dervishes during legal proceedings as well as of other rights.

Sufi woman Sima Entesari, also confined in Varamin’s Qarchak Prison, sent out an open letter on Wednesday, July 25, 2018, passing over her revision court in protest to the unfair decrees handed out for her fellow Sufi women and men. Sima Entesari was sentenced to five years’ imprisonment by Tehran’s Revolutionary Court on July 3, 2018.

The committee following up on cases of the imprisoned Sufis published a list of 324 enchained dervishes saying that the actual number of Sufi detainees is much higher.