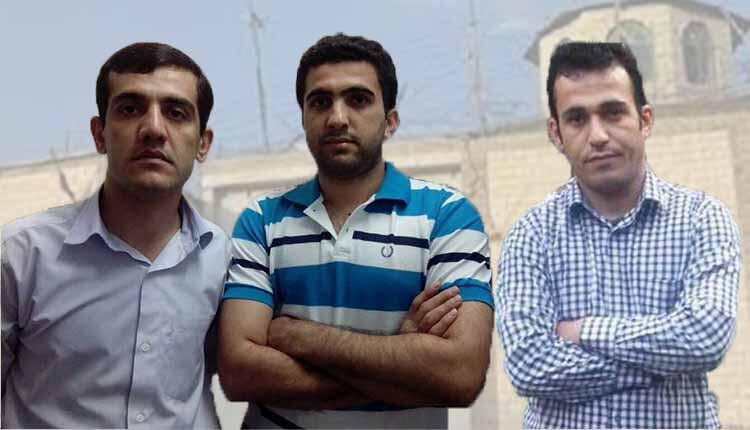 Zanyar and Loghman Moradi were transferred to solitary cells on Wednesday and according to Loghman’s father, are on a dry hunger strike. A few hours after their transfer, the public phones in Rajaie Shahr Prison were cut off without any explanation.

There are fears that these tow political prisoners and Ramin Hossein Panahi might be hanged tomorrow morning.

Loghman’s father said that he visited Zaniar and Loghman in Rajaie Shahr Prison a few hours ago (in what human rights activists fear is the last visit before execution) and he also stipulated that he fears that they will be hanged on Saturday morning.

Transfer of the Kurd men to solitary confinement for execution has moved the Iranian community all across the world and further outraged the public against the Iranian regime, the world record-holder in per capita executions.

Locals angry over the transfer of Zanyar and Loghman Moradi to be executed, rallied outside the Marivan’s Friday prayer imam’s office.

Under the hashtag #SaveXaniar_Loghman_Ramin, Iranian social-media users have called on the Iranian authorities to stop the executions.

UN human rights experts have appealed to Iran to halt the imminent executions of Iranian Kurd prisoners Zanyar and Loghman Moradi, amid serious concerns that they did not receive a fair trial and were tortured during pre-trial detention. They also reiterated calls to halt the execution of Mr. Ramin Hossein Panahi.

“We urge the Government of Iran to immediately halt their executions and to annul the death sentences against them in compliance with its international obligations,” the experts said in a joint statement, following reports that they will be executed on 8 September.

“We are alarmed by information received that Zanyar and Loghman Moradi suffered human rights violations before and during their trial, including torture and other ill-treatment and denial of access to a lawyer,” they said. The two men are cousins.

“The death sentences were imposed after judicial proceedings which do not appear to have fulfilled the most stringent guarantees of fair trial and due process, which are required under international human rights law,” the experts said.

They also expressed concerns over the condition of Zanyar Moradi who has reportedly suffered serious health complications since his initial period of detention when he was repeatedly tortured and ill-treated.

The experts also expressed concern after receiving information indicating that another Kurdish prisoner held at the same prison, Mr. Panahi, will be executed at the same time. They reiterated previous calls to halt his execution and annul his death sentence in light of the reports that he did not receive a fair trial and has been tortured in detention.

Amnesty International also called on the Iranian authorities to immediately halt the planned executions of two Iranian ethnic minority Kurds who allege they were tortured into making “confessions”.

“We urge the Iranian authorities to immediately halt any plans to execute these men, to quash their convictions and sentences, and to order a new trial in proceedings that are in line with international fair trial standards. They must also investigate their torture claims and bring anyone found responsible to justice,” Amnesty International said today.

Amnesty International also calls on the Iranian authorities to reveal the fate and whereabouts of another Iranian Kurd, Ramin Hossein Panahi, who is similarly on death row in Raja’i Shahr prison and at imminent risk of execution.