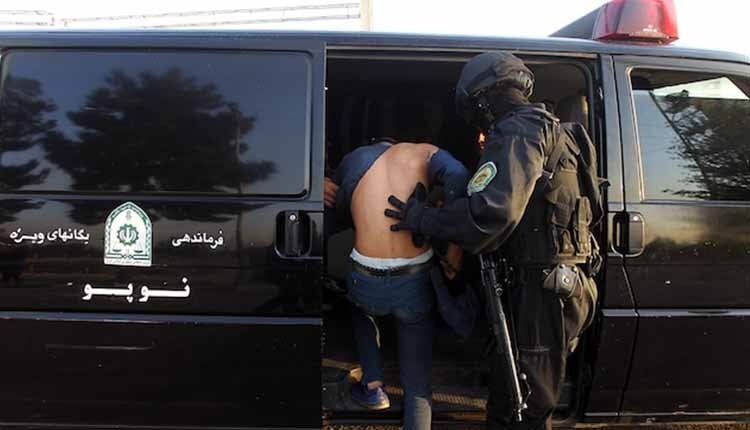 Iran Human Rights Monitor has received many reports on the widespread arrests of protesters in Iran. These reports were sent to us by detained protesters who were tortured in prison and were later released on bail and/or their families.

Iran Human Rights Monitor urges the UN Security Council, the United Nations Human Rights Council (UNHRC) and other relevant UN organizations to take urgent action to secure the release of all political prisoners especially those arrested in the recent protests and to condemn the government of Iran for its extensive suppression of peaceful protests.

According to reports we received from Yazd, Bushehr and Gonaveh, one of the methods that the Iranian government uses to prevent protests is to arrest known activists before the start of protests.

Recently, security forces raided the homes of a number of former political prisoners and activists and detained them.

According to one the detainees from Tehran, he was detained in his home where he was handcuffed and was taken away with blindfolds in August.

“I realized that they were taking me to a safe house affiliated with the Revolutionary Guards Corps where I was kept for a week and interrogated under duress. Since they didn’t have anything on me they bluffed and said that I was in contact with various people… After a week, they took me to another safe house in another town. When they weren’t able to get a confession out of me, they put pressure on me saying that I had to make a statement against the MEK and agree to cooperate with the government in order to be released. I refused and they finally released me after some time”, the person said.

During recent protests, most arrests were made by security forces and plainclothes agents who were under the control of the IRGC and the office of the Supreme Leader.

They used various methods to identify and detain protesters on the streets. Some of these methods are as follows:

“At around 7 am when I was still in my house, they attacked and detained me and took me for interrogation. They showed me various videos which indicated that I had participated in the demonstrations. The videos were recorded via security cameras in the square. They had nothing else against me. I did not accept any of their charges. They released me on bail after seven hours”, the protester said.

Protesters beaten and abused during arrest

A young man who was detained in June 2018 in Arak while writing anti-government slogans on a wall said in this regard:

“A couple of undercover agents suddenly attacked me and threw me in the trunk of a car. The car sped away immediately. When the car stopped, they brought me out and I realized that we were in a dirt road in a deserted area. They started beating me with PVC pipes until all my clothes ripped. They then took me to a place where they interrogated and beat me for nine days”.

Another protester who was detained in Isfahan’s Shahin Shahr Prison during the December/January protests said:

“Those who were arrested in Shahin Shahr were first taken to the municipality building. Their hands were tied with plastic handcuffs until 3am. They were beaten constantly with batons and sticks. At 3 am a bus was brought and everyone was beaten and forced to get on the bus. They beat the detainees until they got to the Shahin Shahr IRGC Detention Center. They took the prisoners to center’s yard, where they made a human tunnel through which the detainees had to pass. The agents on either side of the tunnel beat the detainees with batons and shoved them to each other”.

Another protester said that from the very beginning of his arrest, the agents beat him even though they had nothing against him and while there were no formal charges brought against him. The agents didn’t even bother to show him their badges. The protester was threatened with execution many times during his arrest.

“At 7 am when I was leaving my house, three undercover agents were waiting in the alley outside my home and held me up without showing a badge. I asked them who they were and they said they wanted to take me away and kill me. I confronted them so I could escape and I tried to defend myself but they were three people and they started beating me and forced me in their car. In the car they handcuffed me and sat me down on the middle of the back seat. Two agents were seated on either side of me and one of them blindfolded me. They punched me in the face and head from both sides and told me to give them my mobile password and to tell them who I was communicating with. They said that if I told them all of this, they would let me go, or else they would kill me. I did not give them the password and they continued to hit me. One of them hit me in the ear so hard that my ear became severely injured. One of them punched me in the nose and my nose started bleeding. Another punch struck under my eye. One of the undercover agents had a pointy ring on his finger and when he punched me my face bled and became injured. The car moved and they said that they were taking me for execution. One of the agents wiped my blood with his finger and showed me the blood from under the blindfolds.

‘Look at your blood’, he said. ‘We’re taking you for execution’.”

Those detained during recent protests have been mistreated, abused and tortured in detention centers and prison.

As there were large numbers of detainees in Karaj and Tehran, all the detainees were brought into Rajaie Shahr Prison’s Section 8 from an isolated entrance so the prisoners would remain unknown.

In Evin Prison, tortures such as electric shocks, being hanged from the hands, beatings with batons, and flogging are very prevalent.

Psychological tortures such as urinating on prisoners, threatening prisoners with rape, cutting their beards and other forms of humiliation are also carried out.

One of the prisoners reported that he was hit in the stomach with a chair and was flogged so much that he passed out a number of times.

Most of the people who were arrested during the December/January 2018 protests and after that and were kept in Section 209 were under the impression that they would be hanged and were under severe psychological pressure.

There are many prisoners in section 209 in Evin Prison. Reports indicate that when a prisoner does not “confess” to the crime he is charged of, they are transferred to section 209. Every once in a while, agents ask the prisoner whether he is ready to confess. In this way, the prisoner is kept in an undetermined state until he accepts the charges.

According to a female prisoner from Mashhad who was detained during the January protests, she was threatened to death many times by her interrogator.

“On the second day of the interrogation, the interrogator told me that it seemed that I did not know where I was and did not take it seriously.

‘According to the organization you support, this is the notorious intelligence department’, the interrogator said mocking me.

‘They call me Azrael (angel of death). We made a mistake in not killing all of you in the 80’s (referring to the massacre of political prisoners in 1988). I will burn you with an iron and pull out your nails. I will beat your children in front of you and then kill you’, he told me.”

In Shahin Shahr Prison in Isfahan, various agents, sometimes up to 20 different agents, interrogated one person. They put the protesters, who were filmed in the protesters, under severe pressure. All the interrogators had masks on but according to the prisoners, every time they looked up at the interrogators, they were beaten. The prisoners were taken to various locations for three days without knowing where they were taken. One of the interrogators told a prisoner that if he did not disclose where he was going to send the videos he had filmed of the protests, he would have 20 people rape him and take pictures of it so that “you would be ashamed for the rest of your life and would not be able to keep your head up let alone cause commotion”.

According to eyewitness accounts from Dastgerd Prison in Isfahan, when a severely tortured 20-year-old man was having seizures, agents on the scene paid no heed saying he was faking it.

In Varamin’s Qarchak Prison, women protesters were brutally suppressed. A female protester who was detained on August 3 along with 20 other women and later released said that screams could be heard from various sections in the prison.

“From the very beginning they insulted us and tried to humiliate us.

Many detainees were taken to safe houses or unknown prisons in Tehran where they were interrogated by IRGC agents. They were severely mistreated, abused and tortured in these locations and were then transferred to known prisons.

According to one report, “the IRGC Sarallah Base transferred detained protesters to a location they called Section 1A and after interrogations and extracting information, they were handed over to Evin Prison”.

According to another report, there is a prison called Hakimieh in east Tehran where 200 people were detained. The detainees are interrogated there and then sent to Evin Prison.