Instead of helping flood victims, regime seeks own security 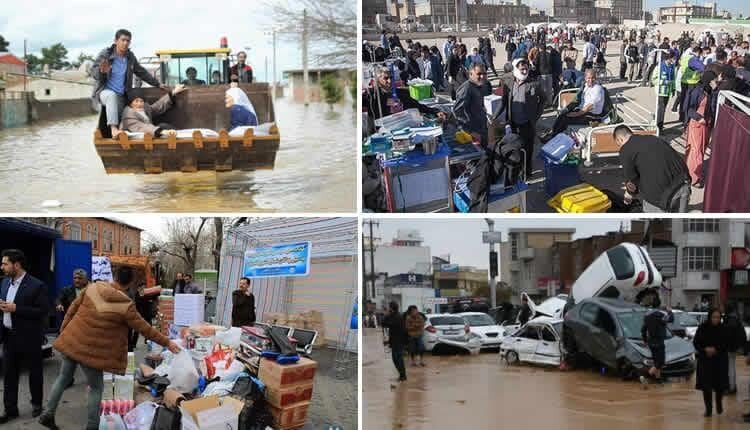 Flash flooding in southern and parts of western Iran reached a new level on Monday while Iranian social media users harshly criticizing the authorities for their handling of the disaster.

At least 30 of Iran’s 31 provinces witnessed flood conditions as reports indicate at least 120 dead in the historic city of Shiraz alone.

At the same time, the regime is trying to hide the real number of victims with the state media reporting 19 people dead.

The disaster comes during Iranian New Year, Nowruz, holidays when many Iranians travel in the country.

Flooding also killed one person in Sar-Pol Zahab county in the western Kermanshah Province, where some residents still live in temporary cabins. They are trying to restore or re-build houses and apartments damaged by a strong earthquake that took hundreds of lives last year.

The lives of those who live close to the banks of the Arvand river, are also at risk amid the possibility of an overflow.

Dozens of people have also lost their lives or been injured in the provinces of Lorestan, Khushistan, Sistan-Baluchestan, Isfahan, Bushehr, Ilam, Kermanchah, Golestan and other parts of the country.

Reports from flood victims indicate that the regime has failed to provide much needed aid to flood stricken areas. News from various cities show a very bleak image of innocent people left without any support.

Iranian social media has been abuzz yesterday and today with photos of people taking matters into their own hands and preparing for flash floods.

The obvious negligence of officials has made MP Kourosh Karampour say that those responsible for the mismanagement of the crisis must be brought to justice.

This is not the first time that Shiraz is facing heavy rainfalls. However, in recent years, the non-regulatory construction of roads and buildings by the IRGC and other bodies of the regime have resulted in obstructing the traditional network of rainwater that protects the city for hundreds of years, and allowed the overflow of water through the main gate of the city.

The residents of Shiraz insist that provincial authorities have not taken recent weather warnings seriously and have not evacuated residents or banned traffic through the historic Quran Gate at the city’s northwestern entrance.

In the meantime, an Iranian journalist accused a former Mayor of Shiraz of filling up a flood channel with rubble and turning it into a public road.

Instead of taking preventive measures and responding properly to the flash floods, the Deputy Commander of the State Security Forces, IRGC General Ayoub Soleimani, said today: “Ensuring security is our most important task in the devastated areas (…) The deployment of fixed and mobile patrols, with the collaboration of Bassij (militia) and IRGC, as well as the installation of checkpoints in many places, are measures that must be taken with all the necessary means to prevent crimes and possible damage.”