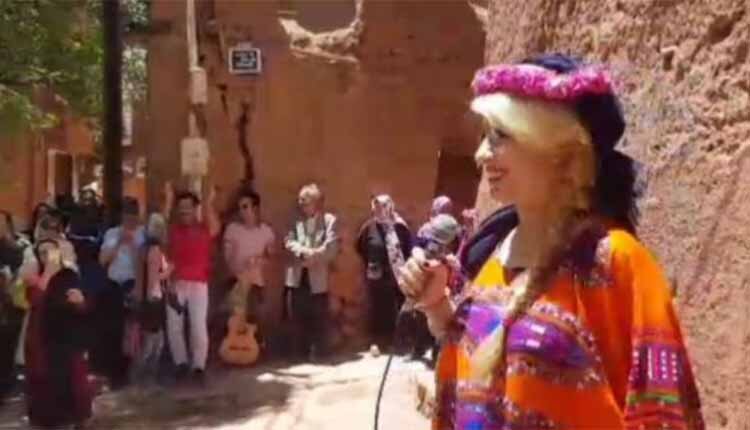 In comments carried by the state-run Tasnim news agency, Ali Isfahani, prosecutor of Isfahan said, “The preliminary case regarding this incident has been filed upon the report of the intelligence police for public security and the Prosecutor of Natanz is following up on it.”

The singer, Negar Moazzam had travelled to Abyaneh on Friday, May 17, 2019, with a sightseeing tour. She sang solo in this historical village and her singing in this area still continues. A video clip of the solo singing of this female singer in the gathering of the local inhabitants of this village was posted on the social media.

Fereydoon Allahyari, director general of Cultural Heritage of Isfahan Province, declared in this regard, “Tour guides are licensed and they are briefed about the professional rules and regulations so that Islamic standards are observed. They are held accountable for the incidents that happen in these tours.”

The Friday prayer leader of Natanz, Ruhollah Amini, also reacted to this news. He said, “I condemn this shameless measure and I have followed up on this issue through the relevant channels. The officials in charge are presently following up on this incident… Judiciary agencies, the Department of Intelligence, and the State Security Force are obliged to deal with such disrespectful incidents. The village master and Abyaneh’s officials are obliged to prevent this brazen measure. The main person involved is presently being prosecuted.” (The state-run Fararu news agency – May 21, 2019)

On March 31, 2019, woman singer, Soheila Golestani issued a statement on her private page informing the public of her prosecution. She stated that she has been summoned to branch 16 of Isfahan’s public court for interrogation. She was accused of violating a religious ban, in public. Ms. Golestani restated that the reason of her persecution is singing and posting her voice on internet.

On February 3, 2019, Guidance Ministry’s music division suspended the activities of a pop group headed by Hamid Asgari, just because a woman singer sang in solo for a few seconds, Al Arabiya Farsi reported on February 3, 2019.

In January 2019, Iranian theater director and playwright Mohammad Rahmanian was charged with “propaganda against the state” based on a complaint by the Islamic Revolutionary Guard Corps (IRGC) for allegedly featuring a female soloist in his play.

He was also detained and released later that day after responding to a summons to appear at a court in Tehran on January 6, 2018, to answer questions about the play, “Old Songs: Paykan Javanan.”

Since the early days of the clerical regime’s rule, women have not been allowed to sing solo in front of mixed-gender audiences. The policy is not specifically dictated in Iranian law but could be seen by the authorities as a public display of immorality, which can be punished with prison time.

The regime’s supreme leader, Ali Khamenei, says that women’s voice must not incite pleasure in those who listen and it must not be connected to any form of corruption. Women are not allowed to sing if their singing leads to corruption and lust.