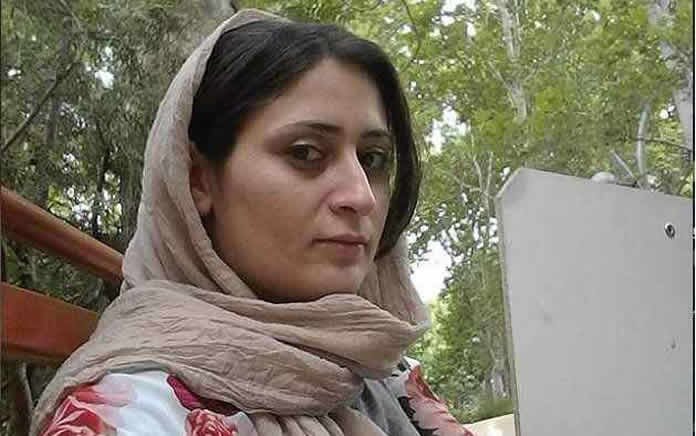 Jailed labor activist Atefeh Rangriz, has been on hunger strike since October 16 in Qarchak Prison, south of Tehran, to protest her unjust treatment in prison.

In an open letter published on October 16, Rangriz said she would use her body to protest her continued incarceration despite having posted bail.

I was arrested on May 1, 2019, during the International Labor Day gathering. After four days, I could be freed on a 30-million-toman bail, but my release was prevented.

“For 28 days, I was being transferred back and forth between Qarchak and Evin prisons and interrogated. Although I had repeatedly told them in my answers that my activities had been completely legal, and I could not understand any of their questions, I finally faced charges which were utterly fake and fabricated…,” she said in her letter.

“I have repeatedly objected to the illegal proceeding of my case, including the rejection of my bail bond, and the authorities’ failure to observe the principle of separation of prisoners’ categories. I have also protested in various ways the handing down of unfair sentences,” Rangriz said.

Rangriz also wrote that the head of the Branch 28 of Iran’s Revolutionary Court, notorious judge Mohammad Moghiseh has raised her bail up to twenty billion rials (approximately $470,000), but despite presenting the bail, he has refused to set her free.”The court authorities have disregarded their verdict for releasing me on bail, and have left my family and me wandering inside and outside the prison,” Rangriz said.

“This is a summary of the unlawful situation I have been through over the past 5 months and 13 days. Outside the prison, my family did not receive any response for their inquiries, neither did I from inside…” she added.

“I know it all too well that my life is not worth protecting for those who are playing with it,” Rangriz lamented. “I will endure this suffering to break the wall of silence that represents the quiet death of civil society and our cries for justice.”

“I will conclude with two words that have echoed throughout the history of oppressed people, “Either death or freedom.”

Women’s and civil rights activist Atefeh Rangriz, 31, was arrested along with 35 other civil and labor activists during the last International Labor Day (May 1) in Tehran.

Atefeh Rangriz was held in solitary confinement in section 209 of Tehran’s Evin prison for several weeks, without access to her family. During the time, Rangriz was subjected to interrogations without a lawyer present and put under pressure to “confess” to planning protests intended to harm national security.

She was charged with “assembly and collusion against national security” and “disturbing public order.”

Rangriz is currently awaiting a decision on her appeal against the verdict.