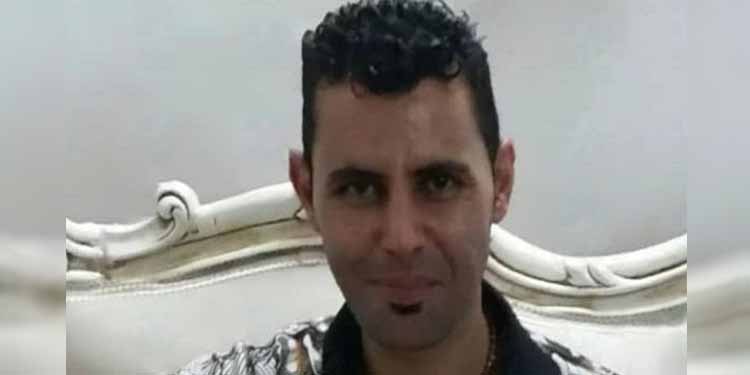 Hossein Reyhani A young man arrested during the November 2019 protests in Iran, has been sentenced for "corruption on earth", a charge carrying the death sentence according to Iran's Islamic Penal Code.

Hossein Reyhani, a young man arrested during the November 2019 protests in Iran, has been sentenced for “enmity against God”, a charge carrying the death sentence according to Iran’s Islamic Penal Code.

Hossein Reyhani has been held in legal limbo at the Great Tehran Penitentiary since he was arrested in December 2019.

In a recent letter from prison, Hossein Reyhani said that he had been arrested and convicted because of sending an SMS with this text “they burnt the bank”, and that he is in danger of death penalty if the supreme court confirms his conviction on charge of “enmity against God” (moharebeh).
“It may sound ridiculous that my crime is just sending a text message to my friend, a message with the content that ‘they set the bank on fire’,” he said in part of his letter.

Hossein Reyhani was arrested at his home in Eslamshahr on December 8, 2019 during the wave of arrests and enforced disappearances following the widespread protests in Iran against an increase in gasoline prices.

IRGC intelligence agents beat him during the arrest and took him to the 2-A Ward of Evin prison, the IRGC’s main detention center in Tehran. Mr. Reyhani was later transferred to the Judiciary Intelligence Detention Center, Ward 241 of Evin Prison.
He was finally transferred to the Great Tehran Penitentiary a month after his arrest.

He has now been sentenced for “enmity against God” and his case was sent to the Supreme Court about two or three months ago.
Mr. Reyhani has been charged for sending a text message to his friend, informing him that that a bank had been set on fire during the protests in Eslamshahr, near Tehran.

Based on the same text message, the authorities said that he was involved in setting fire to the National Bank of Islamshahr.
Now, more than seven months after his arrest and about two months after his case was sent to the Supreme Court, Mr. Reyhani is still being held in uncertain conditions in the Great Tehran Penitentiary.

In a letter that hee has recently sent from the prison, he appealed for help. The letter reads in part:
“Greetings to those who hear my voice. My name is Hossein Reyahni. I was born in 1987 and i am married. Ever since my father died, I have been supporting my family In these difficult economic conditions of the country. I am not educated enough to write and speak, that is, I do not know anything about law or the country or politics at all. It may sound ridiculous that my crime is just sending a text message to my friend, a message with the content that ‘they set the bank on fire’.
After 18 days, on December 8, 2019, IRGC intelligence agents brutally arrested me and transferred to Evin Prison. At first I was very scared and did not know why I was arrested and what would happen in the end.
I was repeatedly tortured mentally in Evin Prison. They repeatedly hit my back, arms and legs with a hose.
I was in the ‘white room’ for 17 days and in solitary confinement for 13 days. I was eventually transferred to the Greater Tehran Prison a month later. I do not know why and how I was accused of moharebeh only for sending a text message.
To this day, I have remained silent only because of my mother, because I did not want her to know about the sentence. A few days ago, I got a letter informing me that my wife has filed for divorce. Now I literally feel like I have nothing to lose. Eight months of uncertainty has exhausted me, and being imprisoned for just one text message has become unbearable for me. I have never been allowed to choose a lawyer and I do not know the status of my case. All I know is that my case is in the Supreme Court. All I know is that I am innocent and have not committed any crime or wrongdoing. I ask you who are reading this letter to help me with your pen. Help me to save myself from this horrible fate.
Hossein Reyhani, Great Tehran Penitentiary – July 2020″

Nationwide protests emerged in November 2019 after an abrupt government increase in fuel prices.
The Iranian authorities carried out a brutal crackdown on protests, killing at least 1,500 people including 400 women and dozens of children.
The authorities arrested thousands of protesters, many arbitrarily.

There have been numerous reports that the authorities have subjected the detainees to torture and other ill-treatment. The families of many detainees have been threatened and warned not to speak to the media.

The authorities in the past months have handed down harsh prison and even death sentences to those arrested during the crackdown.

The Supreme Court has recently upheld death sentences for three young protesters arrested in the November 2019 rallies. Branch 15 of the Revolutionary Court in Tehran had previously convicted Amirhossein Moradi, Mohammad Rajabi and Saeed Tamjidi of several charges including “enmity against God”.

In another development, the Head of the Justice Department of Isfahan Province on June 26 said eight individuals have been sentenced for “corruption on earth”, which carries the death penalty.

Mohammad-Reza Habibi who was speaking at a Friday prayer sermon did not mention any details about these cases or which protests the defendants had participated in but said: “We will be decisive against mercenaries and rioters if crimes are committed like what happened in 2009, 2017 and last November” and added that eight trials have finished and those involved have been sentenced for corruption on earth”.

Iran’s Islamic Penal Code defines the crime of “enmity against God” as “taking up arms with the intention of [taking] people’s lives, property or honour in order to cause fear among them in a manner that causes insecurity in the atmosphere.” The law fails to clarify how an act must be carried out in order to “cause insecurity in the atmosphere”, leaving the determination on this to the discretion of judges. In contravention of international law, the provision on “enmity against God” provides for the death penalty in circumstances where an individual’s actions have not resulted in intentional loss of life.