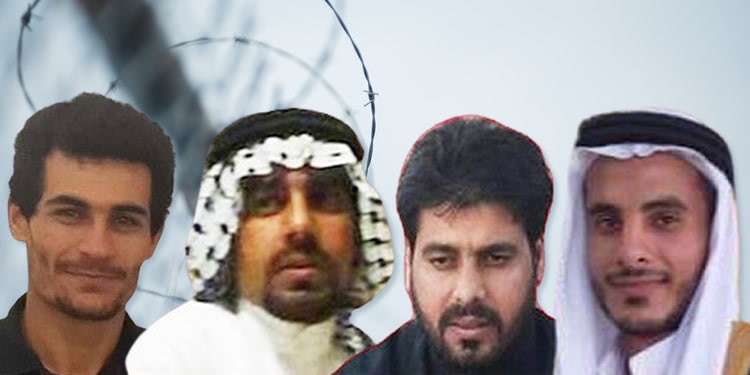 Ahvaz Intelligence Ministry agents contacted the families, instructing them to the Ahvaz’s Chaharshir Square. Intelligence agents blindfolded the families and transferred them to Sepidar Prison, where they visited their loved ones for half an hour.

However, the authorities told them that they were not going to be executed and that they would be transferred to Sheiban Prison.

Their families were waiting outside the prison for half an hour, when they saw the executed bodies of the prisoners being carried out. Prison authorities then confirmed the execution had taken place.

The Ahvazi Arab political prisoners, Ali Khasraji, Hossein Silawi and Jasem Heidary, sewed their lips together and went on hunger strike in January 2021 in Sheiban prison in Ahvaz, Khuzestan province, in protest at their prison conditions, denial of family visits, and the ongoing threat of execution. The fourth Ahvazi Arab prisoner, Naser Khafajian, had been forcibly disappeared since April 2020.

Another Ahvazi Arab prisoner Ali Motairi was on hunger strike when he was executed on January 28, 2021. He was also sentenced to death despite serious due process violations, including allegations of torture and forced “confessions”. Ali Motairi’s family were not notified or granted the right to visit him for the last time.

Naser Khafajian, Ali Khasraji and Hossein Silawi were sentenced to death by a Revolutionary Court in Ahvaz in connection with an armed attack on a police station in Ahvaz on 14 May 2017 that resulted in the death of two law enforcement officials.

They were held for months in solitary confinement in a ministry of intelligence detention centre in Ahvaz without access to their families and lawyers. According to informed sources, they were subjected to torture and other ill-treatment, resulting in their ribs or hands being broken.

Security and intelligence officials tortured them to make confessions, which were broadcast shortly after their arrests in May 2017 and then used by the court to convict them.

The men were not allowed to appoint a lawyer of their choosing. In April 2020, they were forcibly disappeared after being transferred to an undisclosed location. Hossein Silawi and Ali Khasraji were returned to Sheiban prison around November 2020.

An eyewitness who saw Ali Khasraji and and Hossein Silawi in quarantine at the Sheiban prison at the time of their arrest said, “Hossein and Ali were severely injured at the time of their arrest. Each of them was shot several times. Hossein was taken to prison directly from his hospital bed and was tortured. He had no elbow in one hand due to the severity of the bullet wounds he has sustained, so his arm was attached to his wrist with a metal rod and he was in a very painful condition… For nearly two or three months, the two political prisoners were held in a small cell with their wounds infected and were not cared for, so that the stench of blood and their infection bothered others.”

Jasem Heidary was arrested in December 2017, after returning to Iran from Austria, where he had refugee status. He was detained in Tehran and transferred to Evin Prison.

Jasem, 31, was tortured and beaten by prison authorities and was forced into making “confessions” against himself. Due to the severity of the tortures, he was confined to a wheelchair for some time. In March 2018, Jasem was transferred to Ahvaz. His mother, Marzieh Heidary was also detained in March to increase pressure on Jasem.

The Ahvaz Revolutionary Court sentenced Jasem to death for “cooperation with opposition groups” in November 2020, which was confirmed by the Supreme Court. Jasem was arrested for the first time when he was 17 years old and had served a seven-year prison term.

Iran Human Rights Monitor strongly condemns the executions of the four Ahvazi Arab political prisoners and once again urges the United Nations Security Council, the UN Secretary-General, the UN High Commissioner for human rights as well as the UN Human Rights Council, and the European Union, to take urgent actions to save the lives of death row prisoners, especially political prisoners. It also reiterates the need for an international fact-finding mission to visit Iranian prisons and visits prisoners. The case of human rights violations in Iran must be referred to the UN Security Council, and the regime’s leaders must be brought to justice for four decades of crimes against humanity.