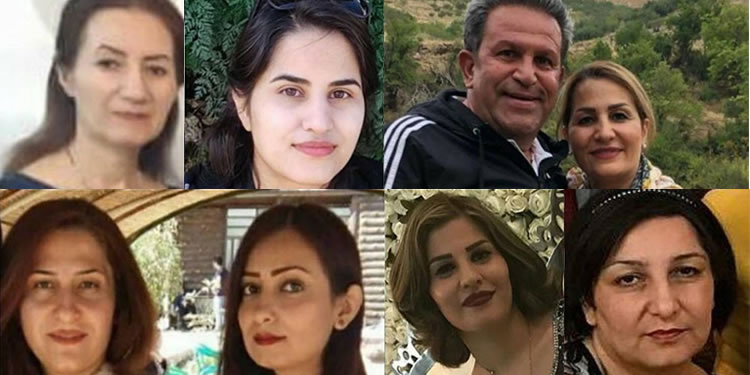 They were identified as Sara Shakib, Firouzeh Rastinejad, Sanaz Rasteh, Azita Rezvani, Mojgan Pourshafi, Nasrin Khademi, Afshin Vajdani, and his wife Noushin Hemmat. They have been taken to an unknown location.

During the raids, security forces confiscated a number of personal belongings of the Baha’i citizens, including laptops, cell phones, books and pamphlets related to the Baha’i faith, family photos, and some CDs.

A sources close to Sara Shakib, who was arrested today said: “Male officers went over Sara Shakib while she was asleep. They violently treated her mother and other family member as well. Some 16 officers who came with four cars inspected all three floors of the house and after a complete inspection, showed an arrest warrant for Sara Shakib and took her away. They said that the family should go to the Isfahan court on Nikbakht Street at 6 o’clock. They also had a warrant for her younger sister, 21-year-old Samira Shakib, and told her that she should turn herself in whenever they called or summoned her.”

Ms. Shakib’s brother, Sina Shakib, a fourth-semester student of statistics and applications, was expelled from the University of Isfahan last week for believing in the Baha’i faith.

The search of other Baha’i citizens’ homes began at around 6 a.m. today and lasted until about 1 p.m., often with violence. Officers reportedly broke down the door of one of the 13 Baha’i citizens while he was not at home.

Earlier in 2015, Sara Shakib, a statistics student at Kashan National University, was expelled from the university in the first semester. Her sister, Samira was also denied higher education in 2018, for following the Baha’i faith.

Baha’i citizens in Iran are facing a new wave of arrests and raids on their homes in several cities across the country.

In the past months, dozens of Baha’i citizens have been detained or summoned to begin their prison terms over their religious faith. Some have been harassed by the state security forces who raided and searched their homes.

Baha’i citizens in Iran face state harassment and discrimination and their faith are not officially recognized.

Since the 1979 Islamic Revolution in Iran, Iranian Bahais have been systematically persecuted as a matter of government policy.

In past years, many Baha’is have been banned from higher education and their businesses have been shut down. Many have been persecuted for their religious beliefs.

Unofficial sources say that there are more than 300,000 people following the Bahai Faith in Iran.

During the first decade of this persecution, more than 200 of Iran’s Bahais were killed or executed. Hundreds more were tortured or imprisoned, and tens of thousands lost jobs, access to education, and other rights – all solely because of their religious belief.