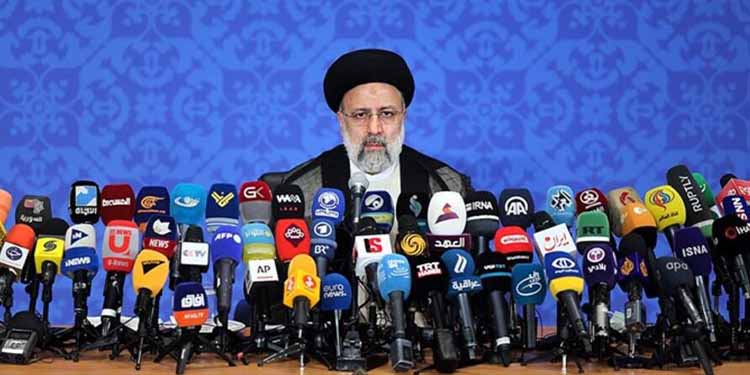 In his first post-election press conference, mass murderer Ebrahim Raisi, implicitly said that he shoud be applauded for killing thousands of Iranians.

When questioned on his role in Iran’s 1988 massacre, mass murderer Ebrahim Raisi brazenly claimed, “From the beginning of my position as a jurist, I have always defended the people’s human rights. Human rights has always been the focal point of all my responsibilities.”

“Those who make accusations, it should be said that today we are the accusers as defenders of human rights. All the measures I took during my posts were always in defense of human rights against those who disrupted the rights of humans.”

Ironically, he added, he “should be commended” for defending the rights of the people.

“If a legal expert, judge or prosecutor has defended the rights of people and the security of the society, he must be lauded and encouraged,” he said.

In an utter shameless statement, he claimed, “I am proud that as a prosecutor, wherever I was, I defended the rights, the security and the well-being of the people.”

He stated that those who violate human rights today in the world must be held accountable for violating human rights in front of the people of the world.

Raisi is on the EU and US sanctions lists for serial human rights violations.

He is a murderer and perpetrator of genocide, who has openly boasted of his role as a member of the ‘death commission’ which oversaw the massacre of more than 30,000 political prisoners in the summer of 1988.

He has always been one of the regime’s top judiciary officials, deeply involved in the regime’s systematic human rights violations.

Having served as the regime’s Judiciary Chief in the last two years, mass murderer Ebrahim Raisi has is responsible for the execution of nearly 700 people, including 22 political prisoners, such as Iran’s wrestling champion and detained protester, Navid Afkari.

The United States sanctioned Raisi in 2019 for his role in human rights violations. He is also responsible for the illegal arrest and torture of thousands of protesters of Iran protests in 2019.

Raisi must be investigated for the crimes against humanity

Agnès Callamard, the secretary general of Amnesty International, responded to the announcement of Raisi’s election by saying: “That Ebrahim Raisi has risen to the presidency instead of being investigated for the crimes against humanity of murder, enforced disappearance and torture is a grim reminder that impunity reigns supreme in Iran.”

She emphasized: “We continue to call for Ebrahim Raisi to be investigated for his involvement in past and ongoing crimes under international law, including by states that exercise universal jurisdiction.”

Amnesty’s secretary general was highly critical of the sham election, stating: “Ebrahim Raisi’s rise to the presidency follows an electoral process that was conducted in a highly repressive environment and barred women, members of religious minorities and candidates with opposing views from running for office.”