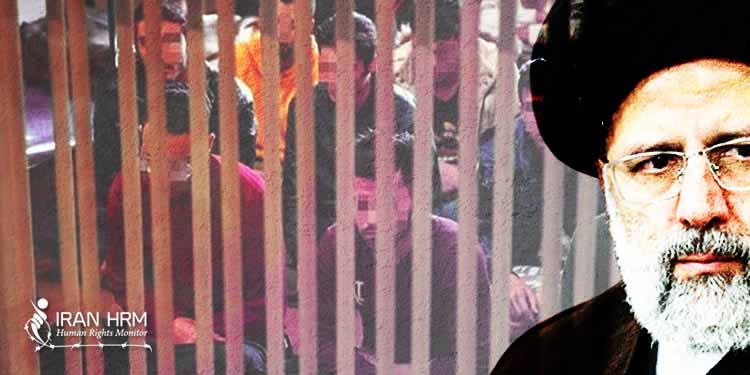 On the International Day in Support of Victims of Torture, we call for accountability regarding the torture and mistreatment of prisoners in Iran and justice for victims

The International Day in Support of Victims of Torture is a United Nations-sponsored World Day to honor and support victims of torture around the world.

This year’s International Day in Support of Victims of Torture coincides with the presidency of Ebrahim Raisi, a mass murderer who played a direct and leading role the 1988 mass extrajudicial executions in Iran.

For the past four decades, Raisi has been involved in some of the worst forms of repression, torture, killing, and crimes against humanity.

After the 1988 massacre of prisoners (most of whom were members of the PMOI/MEK), Raisi served as Tehran’s Revolutionary Prosecutor, Head of the National Inspectorate, First Deputy of the Judiciary, Special Prosecutor for the Clergy, Chairman of the State Television Supervisory Council, Attorney General, Custodian of Astan Quds Razavi, and Head of the Judiciary.

Amnesty International’s Secretary General Agnès Callamard issued a call for Raisi to be investigated for crimes against humanity.

“That Ebrahim Raisi has risen to the presidency instead of being investigated for the crimes against humanity of murder, enforced disappearance and torture, is a grim reminder that impunity reigns supreme in Iran.”

Since Raisi was appointed as judiciary chief by Supreme Leader Ali Khamenei in March 2019, human rights abuses and torture of prisoners have not only continued unabated, but they have also intensified.

Iran’s judicial system is ultimately responsible for the safety and security of all prisoners, including the unlawful and inhuman treatment of political prisoners and dissidents, the numerous acts of physical and psychological torture they’ve sustained during detention, and their prolonged solitary confinement.

They include the numerous acts of physical and psychological torture of prisoners particularly jailed dissidents and activists by prolonged solitary confinement, denial of medical treatment and unlawful transfer of political prisoners to psychiatric hospitals.

The death of prisoner of conscience Behnam Mahjoubi on February 21, 2021, after untreated medical conditions that included serious neurological issues, reflects the continued torture that prisoners sustain during detention.

Mahjoubi, a member of Iran’s severely persecuted Sufi Gonabadi Order, was previously subjected to months of torture. Even though the Medical Examiner had concluded that Behnam could not withstand incarceration, the prosecutor rejected it.

He had been forcibly taken to a psychiatric hospital on multiple occasions where he was injected with chemical substances against his will.

Another prisoner of conscience who died in prison in early June was Sasan Niknafs, with the authorities contributing to his death by neglecting his medical condition. He died while serving a five-year jail sentence at the Greater Tehran Penitentiary.

Sasan Niknafs had been serving a sentence since July 2020 on charges including disseminating “propaganda” against the state and Iran’s leadership. He was imprisoned despite displaying multiple physical and mental health issues, including a history of attempted suicide. He had been suffering from diabetes, epilepsy, and depression but that the authorities refused his release despite numerous requests.

During the tenure of Ebrahim Raisi as the head of the judiciary, there were numerous reports of torture and violence against prisoners.

The situation of the Afkari brothers, who are still in solitary confinement and subjected to mental and physical torture months after the execution of their brother Navid, is just one example of the torture of prisoners.

In addition, Iran’s judicial system has a documented history of unlawfully sending detainees to “exile”. Several political prisoners including peaceful activists, religious minorities, and dissidents were being sent to remote, severely under-resourced prisons as a form of additional punishment in the middle of their prison terms. In many cases, prisoners were being severely beaten upon their transfer.

News of the beating of political prisoners in Iran has become a daily occurrence in the last two years.

Vahid and Habib Afkari, the brothers of Navid Afkari, a wrestling champion who was executed in September 2020, were arrested during 2018 protests in Shiraz.

The pressures and torture imposed on the two living brothers have been so intense that Vahid Afkari attempted suicide after being assisted by Adelabad Prison officials who gave him a glass cup to cut his throat.

In a recent audio message smuggled out of prison, Vahid Afkari said he was tortured and fears he will also be executed. “I can only depend on reason and the law,” he said. “There’s no other way (to save my life). People of Iran, I’m innocent!”

Several prisoners have been beaten to death in Iranian prisons.

In May, a prisoner identified as 35-year-old Amir Rezai was beaten to death by the authorities in the Urmia Central prison in northwestern Iran. He was arrested 10 years ago on drug related charges and was sentenced to 20 years of prison.

In yet another case in February, a Kurd man identified as Mehrdad Taleshi who was detained on February 1 by security forces in Tehran was killed under torture. The 21-year-old man was arrested along with another man under suspicions of carrying drugs. He was initially taken to the 113th Police Station but was later transferred to the 115th Station. Evidence of torture and severe beatings were found on his head and neck. Mehrdad’s family said he was an athlete and had no previous criminal record and did not take drugs.

Earlier, Amnesty International reported on the prevalence of severe torture and violence in the Iranian regime’s detention centers and prisons.

The Amnesty International report states that prosecution and judicial authorities failed in their legal obligations to conduct independent and impartial inspections of detention facilities, including those run by security and intelligence bodies, and to ensure that legal provisions banning the use of secret detention and torture and other ill-treatment against detainees are respected.

Death of prisoners under torture

According to research by Iran Human Rights Monitor, some 30 prisoners, including three political prisoners – Sasan Niknafs, Alireza Shirmohammad Ali and Behnam Mahjoubi – have died in detention due to being tortured since Ebrahim Raisi was appointed as the head of the judiciary in March 2017.

These deaths occurred due to beatings and torture during detention, deprivation of necessary medical treatment, or negligence or ill-treatment by authorities.

In many cases, judicial authorities have claimed that the cause of such deaths was suicide.

This is while, families of the prisoners have repeatedly spoken about the systematic torture or denial of access to medical treatment in Iran’s prisons.

Iran Human Rights Monitor also calls on all international organizations to hold Iranian regime officials accountable for their torture and ill-treatment of prisoners.

Governments around the world must condemn the Iranian regime for the widespread use of torture against prisoners and depriving them of medical access, which in many cases has led to the extrajudicial killing of prisoners. Ebrahim Raisi and Ali Khamenei are responsible for the detention, harassment and death of political prisoners and dissidents, including Behnam Mahjoubi and Sasan Niknafs, and must be held accountable.

The international community should pay more attention to reports of torture and death of prisoners in Iran.