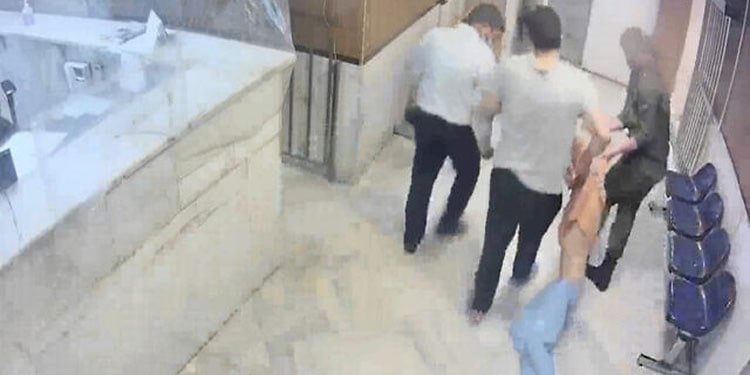 Hacked footage from security cameras in Iran’s Evin Prison and the publication of some of the prison’s documents published online by a group of hackers “Edalat-e Ali” (Ali’s Justice) revealed a fraction of the crimes committed in Iran’s prisons.

The release of these images provoked strong reactions from international human rights organizations.

The head of Iran’s prisons, Mohammad Mehdi Haj Mohammadi tweeted on August 24, 2021, that he accepts “responsibility,” asks “forgiveness” from God, and said he would make an “effort” to prevent further mistreatment yet has yet to follow through on his pledge. It was a rare admission of abuse by authorities.

After the videos surfaced, human rights organizations and activists reiterated calls to hold the regime to account for its human rights abuses.

“This disturbing footage offers a rare glimpse of the cruelty regularly meted out to prisoners in Iran. It is shocking to see what goes on inside the walls of Evin prison, but sadly the abuse depicted in these leaked video clips is just the tip of the iceberg of Iran’s torture epidemic,” said Heba Morayef, Middle East and North Africa Regional Director at Amnesty International.

It is worth noting that although heart-rending, the videos do not show everything that is going on in Evin Prison.

They do not reveal anything about the sections controlled by the state security establishment, including the Islamic Revolutionary Guard Corps (IRGC) Intelligence Organization (Ward 2-A) and the Ministry of Intelligence (wards 209 and 240).

Accounts given by prisoners who spent time in Evin prison in different periods pertain to physical torture, deprivation of food and medicine, lack of basic hygiene, lack of access to family and lawyers. Evin’s prison guards are notoriously renowned for torturing prisoners to death.

It is also worth reminding that Evin is just one of many prisons where inmates are subjected to brutal conditions.

Many civil society activists believe that the situation is much worse in other prisons that are not as well known as Evin.

Furthermore, most Iranian cities faced rapid spread of Delta variant because the regime’s Supreme Leader Khamanei banned vaccines from the onset of the outbreak.

In this monthly bulletin, Iran Human Rights Monitor has tried to shed light on a small part of the violations of human rights in Iran.

The lawyer of Iranian Kurdish prisoner Heidar Ghorbani said that the supreme court has denied his request for a retrial. Mr. Ghorbani was tortured and sentenced to death without a lawyer. One of his former cellmates, Ebrahim Yousefi, published an audio file on August 29, 2021, describing marks of torture that he had seen on Ghorbani’s body after Ghorbani was interrogated in the Intelligence Ministry’s detention center in Sanandaj during the winter of 2017.

In September 2020, Amnesty International published a report stating that following Ghorbani’s arrest on October 11, 2016, “the authorities put him in solitary confinement for several months and subjected him to enforced disappearance.” Ghorbani’s requests for a judicial review by Iran’s Supreme Court were denied in September 2020 and August 2021.

Iranian police paraded locals on the streets as a way to publicly degrade and humiliate them in two separate cases in August 2021. Humiliating people by parading them around cities and towns is a known practice of Security Force in Iran. This contradicts all human rights conventions and violates human dignity.

Iran’s police public paraded 15 home robbers on the streets on August 22 in Khorramabad, western Iran. According to the state-run Tasnim News Agency, during the “ceremony” the Khorramabad Public and Revolutionary Prosecutor accused the home robbers of “Moharebeh” or waging war against God and said they would be sentenced to death. This is while they have yet to be tried.

In another development security forces publicly paraded three men on the streets on August 29 in Naqadeh, West Azerbaijan Province.

The 104th branch of a criminal court in western Iran sentenced a media activist to prison and lashes for “defaming” local officials.

The Sanandaj court sentenced Morteza Haghbayan to two years and six months of prison, 90 lashes, and a 10 million toman fine (around 390 USD) for “defaming officials in Kurdistan Province and publishing government documents”.

Haghbayan was tried on November 16, 2020 and was officially informed of his sentence on August 3.

He was detained on August 26 last year by security forces in Sanandaj and was temporarily released on a 260 million toman bail, around 10,000 USD, 67 days later. Haghbayan was kept in solitary confinement in the intelligence agency during his 67 days of incarceration.

He was detained for being active in the “Aamak” Telegram Channel which disclosed the corruption of Kurdistan officials. All the posts in the channel have since been deleted and only a notice by the regime’s Cyber Police remains.

freedom of assembly and association

A man identified as 27-year-old Mohammad Alizadeh was was fatally shot during the protests in the city of Naqadeh on 7 August. According to Amnesty International a man in civilian clothes shot him with a pistol. Eyewitnesses said the man was walking behind a group of riot police who were chasing protesters, suggesting that he was operating alongside or at least with the acquiescence of security forces.

Mohammad Alizadeh decided not to seek medical treatment for fear of arrest. Amnesty International said that he had not realized that he had been shot with live ammunition as he suffered no visible external bleeding. He fell unconscious soon afterwards and died on his way to hospital. His family were told by state forensic authorities that he had died from internal bleeding caused by gunshot wounds.

Two Iranian Bahais identified as Abbas Taef and Attoallah Zafar were sentenced to a total of two years of prison by Tehran’s Appeals Court.

They were each sentenced to one year of prison by Tehran’s Revolutionary Court for “acting against national security by promoting the Bahai faith”. The Provincial Appeals court confirmed their sentence on July 6.

An Iranian Bahai identified as Ali Ahmadi from Qaemshahr was summoned on August 26 in northern Iran to serve his prison terms for following the banned faith. He was previously sentenced to one year of prison by Branch 28 of the Mazandaran Appeals Court. He was transferred to the Qaemshahr prison. Ali suffers from diabetes, heart problems, and thyroid illnesses, and transferring him to the COVID-19 infected prisons is a threat to his health.

An Iranian Bahai woman identified as Sanaz Notghi was sentenced to five years and eight months of prison by the Ahvaz Revolutionary Court in southwestern Iran. She was charged with “membership in the illegal Bahai organization” and “spreading propaganda against the state”. Her trial took place on July 17.

Three Christian converts, Milad Goudarzi, Ameen Khaki, and Alireza Nourmohammadi, were sentenced to prison in Karaj near Tehran on August 22. The three Christian converts were charged with “spreading propaganda and deviant educational activities opposing Islam” and sentenced to five years of prison each, and a fine of 40 million tomans (about $1,412).  It was later reduced to three years of prison each.

The Iranian regime’s Supreme court rejected a retrial requested by political prisoner Vahid Afkari, according to his lawyer.

The lawyer of the Afkari brothers, Saeid Dehghan, tweeted that despite the contradictions in the case, the 38th branch of the Supreme Court rejected their requested retrial.

“Even if they had just skimmed through the case document, there were enough legal reasons to accept a retrial as the verdict contains 24 contradictions and 3 lies,” Dehghan tweeted.

Dehghan said Vahid Afkari was sentenced to 25 years imprisonment based only on the “Judge’s knowledge and without observing Article 211 of the Penal Code.”

The human rights organization also wrote: “Prisoner of conscience Maryam Akbari Monfared has been held in cruel and inhumane conditoins in a distant prison in Semnan province far from her family since March 2021, in reprisal for her open letters condemning the Iranian authorities’ human rights violations and seeking truth and justice for her siblings who were forcibly disappeared and extrajudicially executed in secret in 1988. She has been unjustly jailed for nearly 12 years.”

The Iranian regime’s military and armed forces, including the IRGC and the security and border guards killed at least six civilians in August.  At least nine civilians were injured and wounded as a result of indiscriminate shootings by security and military forces last month.

In the past month, the Delta variant of the deadly COVID-19 virus has been ravaging across Iranian cities. In Tehran, the daily deaths reached a new record of 390 yesterday. The Deputy Minister of Research and Technology in Iran’s Health Ministry said in a letter on August 12 that the daily deaths from COVID-19 will reach 800 if the situation does not worsen.

State-run media report of hospitals and ICUs brimming with COVID-19 infected patients. At the same time, cemeteries are filled, and provinces report not having enough room to bury the bodies.

Iranians are openly blaming Khamenei for the deaths of COVID-19 victims, who could have been saved if he had not banned the reputable US and UK-made vaccines.

Haidar Ghorbani roasted like a chicken and hung from the ceiling, cellmate reveals