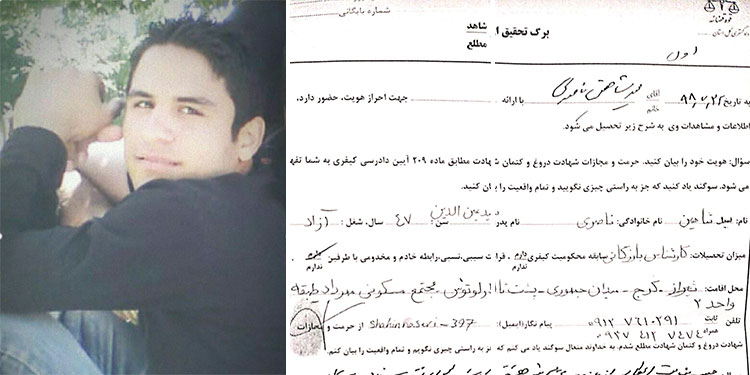 Shahin Naseri, a witness to the torture of Navid Afkari, the wrestler who was executed in Iran on September 12, 2020, died today under suspicious circumstances at the Greater Tehran Penitentiary.

Shahin Naseri’s brother confirmed the news and said: “His friends told us that he was killed in solitary confinement. But no official has contacted us yet.”

A source close to Naseri’s family said: “A few days ago, coinciding with the first anniversary of the execution of Navid Afkari, he (Shahin) was transferred from the hall where he was held at the Greater Tehran Penitentiary (GTP) to an unknown location. We thought he had been transferred to a security agency because he had been repeatedly threatened by security officials to remain silent about the Afkari brothers‘ case, but a few days ago we found out that he was being held in GTP. Shahin Naseri had no underlying illness and his abrupt death is quite suspicious.”

Although Shahin Naseri’s death has not yet been officially announced to his family, his brother has confirmed the news and said: “His friends told us that he was killed in solitary confinement. But no official has contacted us yet.”

In October 2019, Shahin Naseri filed a signed statement with the judiciary in which he said when he was brought into the police station in Shiraz in late September 2018 (soon after Afkari’s arrest), he saw Afkari being severely beaten by two plain-clothed men with a metal bar and a baton, cursing and telling him to confess to their version of the murder of a security guard in August 2018.

In an audio file shared on social media on August 30, 2020, consistent with his written statement submitted to the judiciary, Naseri said the Medical Examiner’s Office investigated the marks on Afkari’s body and confirmed he had been tortured.

“The police said there was no need for me to appear in court to testify [about Afkari being tortured], the judge will investigate if he feels it’s necessary,’” Naseri said.

He continued: “The man standing above Navid said, ‘Whatever I say is the truth.’ I don’t know his name but he had colored eyes with a bright red face and long hair that seemed to be implants. Navid had his hands on his head. The man pounded Navid’s arm four times and cursed at him and said, ‘What I say is what happened.’”

Naseri added: “Navid was spread out on the floor with his hands on his head begging them to stop beating him. When I was brought into the station, I saw Navid’s arm was crushed and inflamed. Navid was saying ‘Sergeant Abbasi broke my arm.’

“I was at the police station for about two months and I witnessed Navid being in pain and discomfort from the broken arm. I saw his hand being struck with my own eyes.”

After he testified about the torture Navid Afkari, Shahin Naseri was pressured to take back his testimony. He was repeatedly transferred to solitary confinement.

Naseri said when he testified in court, he was threatened by the judge and told he “was interfering in a security case” and that he would be made to regret his testimony.

In a statement released on September 15, Amnesty International said: “Iranian authorities have failed to provide accountability for at least 72 deaths in custody since January 2010, despite credible reports that they resulted from torture or other ill-treatment or the lethal use of firearms and tear gas by officials.”

“Ensuring respect for people’s right to life requires that officials suspected of torturing prisoners to death are criminally investigated, and if enough admissible evidence against them is found, prosecuted. Lack of investigations constitutes in and of itself a violation of the right to life,” Amnesty said.

Iranian reporter detained for revealing murder of a child bride