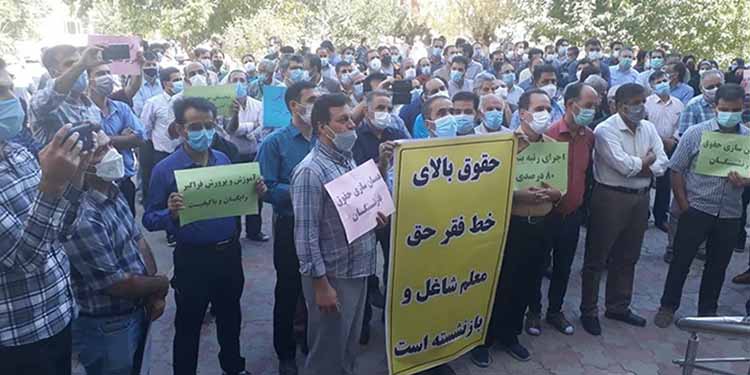 The World Teachers’ Day on October 5 is a day for countries to honor their teachers and the important role they play in raising the future generations.

Teachers need job security and a decent pay to provide the next generations with adequate education.

In an Iran under the mullahs’ rule however, the living conditions for teachers is far below acceptable standards. Going unpaid for months, injustice in the adjustment of their wages with the living costs, and having no medical insurance are amongst the issues that make life difficult for and consume the energies of Iranian teachers. Instead of providing a good education, teachers in Iran are preoccupied by making their ends meet.

This is in stark contrast to developed countries like Sweden where teachers have some of the highest paying jobs and are among the most educated.

Despite severe repression of protests and the continuation of judicial and security crackdowns on activists, teachers’ protests have been ongoing in recent years.

Meanwhile, prominent teachers’ rights activists were given long prison sentences for their peaceful activities to defend the rights of their colleagues.

Teachers in Iran face many difficulties in earning a living due to low salaries.

Activists believe that, given the poverty line set by independent economists, Iran’s teachers are practically living below the poverty line. Public schools are run with people’s money, and the quality of education there is inadequate.

The Teachers’ Trade Association has repeatedly protested against the low salaries of teachers in Iran.

Amin Kianpour, a high school math teacher self-immolated on June 27 outside the Judiciary building in Isfahan, central Iran to protest a court ruling forcing him to evacuate his home. He later died from the severity of his burns. According to the state-run ISNA News Agency, the 43-year-old was father of two girls. Amin had filed a complaint against the previous owner of his home, who had sold his apartment to two people simultaneously. The court ruled in favor of the first buyer and Amin was told he had to evacuate the building.

“Teachers in Iran have hard times these days. Another teacher at our school who has with 26 years of experience still lives in a rented home and his landlord has asked him for 300 million tomans in mortgage ($11,848). How much do you think teachers earn? When a teacher finally gets to own his house then they are told to evacuate. How do you think they feel?” a colleague of Amin told ISNA.

Another math teacher in Fars Province, southern Iran died on September 15 after hanging himself out of poverty. Qolam Abbas Yahyapour had asked for a 50 million toman ($2k) bank loan but could not afford the 5 million toman (less than $200) bank deposit.

Teachers have staged numerous strikes and protests in recent months to demand higher salaries and better living conditions, but Iranian regime officials have refrained from addressing their demands.

As the start of the new school year neared, teachers in Iran resumed holding successive nationwide protests throughout September.

The teachers’ protests have spread to 40 cities in 20 provinces across the country.

Repression of teachers in Iran

Teachers in Iran have been protesting for years for their legitimate demands. But the regime’s response, while promising to solve teachers ‘problems, has been to repress peaceful gatherings and the arrest of teachers’ activists.

In one of the last cases security forces arrested Aziz Ghasemzadeh, the spokesman for the Gilan Teachers’ Trade Association on September 26.

Mehdi Fathi, a trade union activist in Fars province and a history teacher, was violently arrested on September 14 by security forces. He has only had one brief contact with his family since he was arrested. The imprisoned teacher is denied access to medical treatment despite suffering a heart condition. Mr. Fathi has also been harassed by security forces in recent years for his union activities.

Tehran’s Revolutionary Court summoned Mahboubeh Farahzadi to report by October 2, 2021. Farahzadi is a teachers’ rights activist and a member of the Voice of Iranian Women Association (Neda-ye Zanan-e Iran).