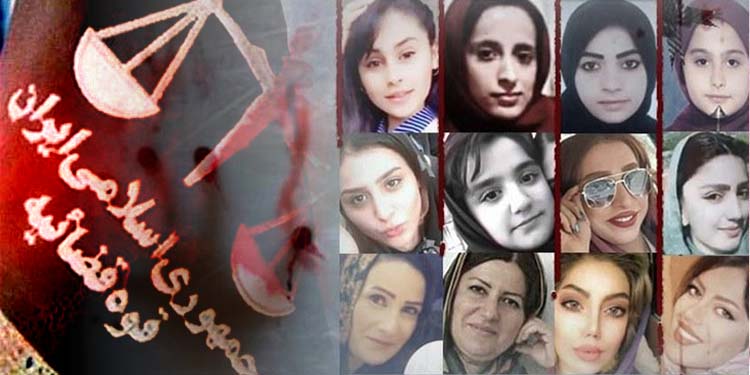 Honor killings in Iran are on the rise, despite ongoing protests and activism.

In fact, the clerical regime perpetuates and systematically promotes various forms of violence against women.

There are no exact statistics on honor killings in Iran, but in recent months there have been numerous reports of these cases in the media and cyberspace.

In December 2019, the state-run ISNA news agency wrote in a report citing university research that “between 375 to 450 cases of honor killings occur annually in Iran” and “honor killings in Iran” account for about 20% of all murders and 50% of family murders.

Iran is one of four countries that have not acceded to the UN Convention on the Elimination of All Forms of Discrimination against Women. According to the clerical regime’s laws, a father who has killed his child is not considered a murderer and the punishment for murder is not considered for him.

The murder of 22 year old Faezeh Malekinia in early October triggered a bitter debate over the tragedy honor killings in Iran.

Faezeh Maleki was a widow who intended to get married again with the man of her choice.

Her father, however, did not agree with her marriage. According to the latest reports, he imprisoned her in the toilet in a garden. Subsequently, he doused her with petrol and set her alight, on the night of Saturday, October 2, 2021.

The news of Faezeh’s condition was first posted on the social media by her surgeon, Iman Navvabi. She had told the doctor that her father had set her on fire.

Faezeh’s father said his daughter had self-immolated and his hands had burned while trying to put out the fire.

The Coroner’s Office did not do an autopsy on Faezeh’s body or issue a document, legally mentioning the reason for her death.

Government or judicial agencies have not taken up the case and her father has not been interrogated. Some officials have told the press and state media that the case does not have a private plaintiff, and it appears to be a case of self-immolation.

Faezeh’s family prevented a women’s rights activist from interviewing Faezeh’s younger sister who accompanied her father and sister in the garden on the day of the incident.

The man who was going to marry Faezeh said she had been very hopeful. “I do not believe that Faezeh committed suicide,” he said, adding, “Two days before the incident, there was no news of Faezeh. Her father had detained her in the garden’s toilet. One cannot lock the toilet’s door from inside, and clearly, the door had been locked from outside.”

On October 4, 2021, the public and general prosecutor of Sanandaj, Mohammad Jabbari, announced that the doctor who made the case public would be dealt with.

What is the reason of honor killings in Iran?

Different analyses are based on the clerical regime’s misogynous laws and patriarchal culture institutionalized in Iranian society and families.

Rezvan Moghaddam, who has documented the honor killings in Iran over the past decades, questions this justification. She says, “This is just an effort to conceal the truth. For example, what could be the family difference between a father and his 13-year-old daughter or between a brother and his elder sister? There are other reasons behind these differences.

“In other cases, families regard divorce as a disgrace. To protect the family’s dignity, male relatives murder a woman who asks for a divorce. Again, this is explained under the title of ‘family differences.’

“Their fiancées kill some women for saying no to their proposals. These murders take place because the man believes he owns the body of his fiancé. He views her negative answer as an insult to himself. I believe honor killings are rooted in the sense of ‘owning a woman’s body and life, and any murder rooted in this sense of ownership is considered an honor killing.”

Rezvan Moghaddam says, “In general, the government in Iran sanctions violence against women. The state media distort the news of the murder of women. Violence against women is not criminalized. A lack of safe shelters for battered women and a lack of sound judicial investigations have made life very difficult for women. The statistics on violence rise by the day, and one can palpably see the collaboration among the political, legal, and patriarchal regimes against women.”

A glance at the collection of Iranian laws on women reveals that Iran’s legal regime does not consider women independent human beings because of their gender. This outlook systematically provides the legal license for violence in all its forms and particularly for the murder of women, Moghaddam said.

The legal structure helps the patriarchal order and reactionary traditions convince society that women must be owned.

In reviewing Article 301 and the large number of daughters killed by their fathers, one finds out that most of these murders are to protect the father’s dignity.

Articles 612 and 630 of the Islamic Punishment Law are related to women. In these articles, the Judiciary is not responsible and grants the legal decision to the murderer. Thus violence against women finds its legal justifications and license and is implemented based on patriarchal views and reactionary traditions.

Father of three sentenced to flogging for theft of cashews