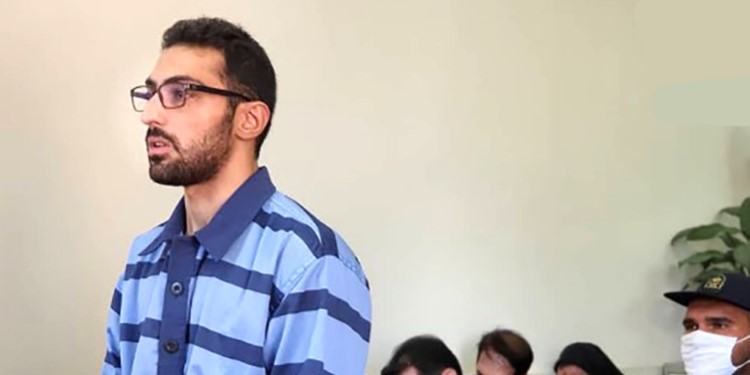 The authorities of clerical regime hanged Arman Abdolali this morning, November 24, 2021. The execution took place in Rajaei Shahr (Gohardasht) Prison in Karaj, west of Tehran. Arman’s family did not have the chance to visit him for the last time.

Arman Abdolali was transferred to solitary confinement on Sunday, November 21, 2021, to prepare his execution after eight long years in prison.

Over the past few months, the authorities took Arman to solitary confinement seven times pretending to want to execute him, a practice which is intended to torture the prisoner.

The death sentence was carried out while there were many ambiguities in his case and despite international and domestic outcry to stop it.

Amnesty International called for a halt to his death sentence.

Amnesty International had earlier, on 11 October 2021, warned of the imminent execution of Arman Abdolali and called on the Iranian regime to suspend the sentence. Diana Eltahawy, Amnesty’s deputy director for the Middle East and North Africa, called on the authorities to “immediately halt all plans” to execute Abdolali, saying the use of the death penalty against people who were under 18 at the time the crime was committed is prohibited under international law and constitutes an “abhorrent assault on child rights.”

The sentence was upheld by the Supreme Court in July 2016. The trial and appeal verdicts both noted Arman Abdolali’s allegations that he was held in prolonged solitary confinement for 76 days and repeatedly beaten to “confess”, but no investigation was ordered and the “confessions” were described by the court as “unequivocal”, the rights group said.

Arman Abdolali was first sentenced to death in a grossly unfair trial in December 2015 after being convicted of murdering his girlfriend, Ghazaleh Shakour. The court relied on torture-tainted “confessions”, in connection with the disappearance of his girlfriend in 2014, according to Amnesty International.

“I was a child at the time. I made many mistakes, but I did not commit any murder,” said the prisoner, who spent eight years in prison on death row.

According to the Convention on the Rights of the Child, to which the Iranian regime is a signatory, the death penalty should not be imposed on persons under 18 years of age. However, the Iranian regime carries out the largest number of executions of juvenile offenders.

While condemning the execution of juvenile offender, Arman Abdolali, Iran Human Rights Monitor calls on the UN Secretary-General, the High Commissioner for Human Rights, the UN Human Rights Council, the UN Special Rapporteur on the situation of human rights in Iran, and all human rights defenders, to take effective measures to save the lives of death row prisoners in Iran.

The dossier of human rights violations in Iran must be referred to the UN Security Council to hold the clerical regime officials accountable.

Political prisoner chained to bed in the emergency room