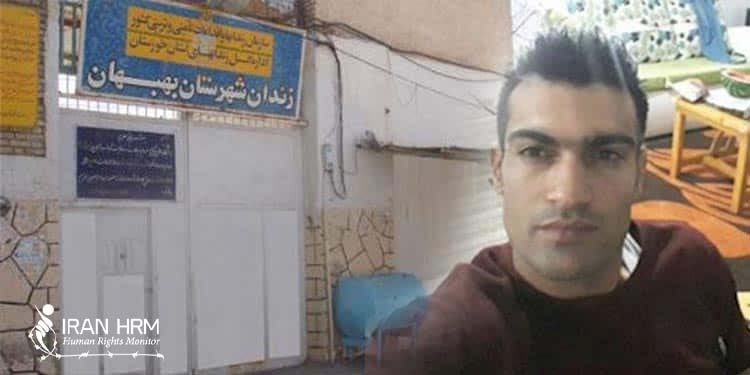 Reliable sources in the Prison of Behbahan, in the southwestern Khuzestan Province, reported that Mehran Qarebaghi, 29, is in tremendous pain because of a heart condition he has suffered due to stress and massive pressure under interrogation and during detention. Nevertheless, he is deprived of all forms of medical care. He is being pressured in this way to make false confessions against himself.

Agents of the Intelligence Ministry and his interrogators have told this prisoner: “We will keep you in detention until your hair turns white like your teeth and you go insane!”

Despite his physical conditions, political prisoner Mehran Qarebaghi remains in an undecided state. He is under pressure to express remorse and make false confessions in a television interview.

The Revolutionary Court of Mahshahr set a bail of 3.5 billion Tomans for his release last October. However, the Ministry of Intelligence prevented his release.
Born in 1992, Mehran Qarebaghi has a bachelor’s of science in Agriculture.

Agents of the IRGC Intelligence of Behbahan arrested him and Majid Khademi on January 18, 2020. Almost after a month of interrogations, they relocated him to the Prison of Behbahan.

After some time, the Public and Revolutionary Prosecutor’s Office of Behbahan arraigned Mr. Qarebaghi of his charges including “propaganda against the state, complicity in the destruction and setting fire to public property, complicity in the disruption of public order, complicity in making non-military inflammable instruments, membership in one of the opposition groups (The People’s Mojahedin Organization of Iran (PMOI/MEK), and corruption on Earth.

His case was subsequently referred to the Revolutionary Court of Mahshahr where they set a bail of 3.5 billion Tomans for him. Mr. Qarebaghi was deprived of visitations from February until May 2020.

The Revolutionary Court sentenced Mehran Qarebaghi to three years in prison on charges of “insulting the (mullahs’) leader” and “propaganda against the state” for a previous case, two years of which will be implemented according to the Article 134 of the Islamic Punishment Law. He is presently serving his sentence in the Prison of Behbahan.

The clerical regime’s Judiciary has detained Mehran Qarebaghi for two years without trial. He is under constant pressure.