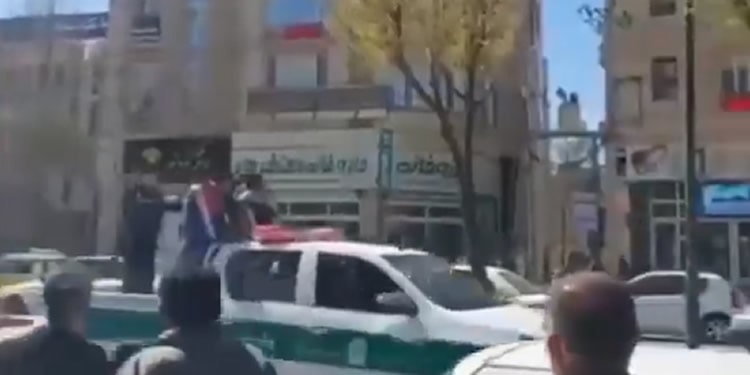 In another public display of humiliation and degradation, the state security forces paraded several men on the streets of Kermanshah, western Iran.

These people have been called by the police as “thugs and perpetrators of recent insecurities in the city of Kermanshah” and they were paraded across the city by a court order.

Humiliating people by parading them around cities and towns is a known practice of Security Force in Iran. This contradicts all human rights conventions, and violates human dignity.

The regime’s public displays of humiliation have outraged Iranians who have compared the parading of Iranians on the streets with similar measures carried out by ISIS.

The regime has carried out various “plans” to deal with what they call “thugs, hooligans and troublemakers” in the past decades. Though the official motive behind the crackdown is crime prevention, these measures are politically motivated and designed to intimidate and subdue Iranians to prevent protests against the regime’s absolute rule.

Khamenei behind public degradation of “thugs”

In October 2020, with the increase of the public degradation of “thugs” on the streets of Iran, a top military intelligence official implied that the regime’s Supreme Leader was behind the new crackdown measures. The Deputy of Intelligence and Security of Iran’s Armed Forces said the regime had initiated an organized plan confirmed by the country’s Security Council to “fight thugs and hooligans”. Majid Mirahmadi said the new initiative was carried out upon the “demands” of Ali Khamenei.

“As the representative of the Chief of Staff of the Armed Forces I announce today that the main demand of the Supreme Leader and the Commander in Chief is drying out the roots of lack of security in the community,” he said.