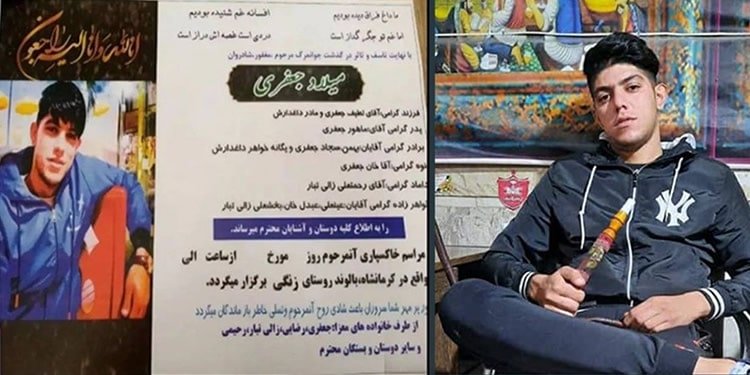 According to the report, Milad Jafari, 25, had been arrested on drug-related charges on April 7.

A relative of Milad Jafari told the Kurdistan Human Rights Network that he and a friend were violently detained by intelligence agents on drug charges.

He added that after a few days and with the follow-up of Milad Jafari’s family, they received phone calls from the Kahrizak forensic medicine in Tehran asking them to collect Jafari’s dead body.”

He said that Milad Jafari’s body was taken to Kahrizak forensic medicine on April 19, while security forces said he died on April 22.

The authorities claimed that suicide and falling from a height was the cause of his death.

The family however says that he was killed under torture.

Milad Jafari’s family refused to deliver his body until the autopsy was performed, as the cause of his death was unclear.

Iranian authorities have failed to provide accountability for at least 72 deaths in custody since January 2010, despite credible reports that they resulted from torture or other ill-treatment or the lethal use of firearms and tear gas by officials, according to a report by Amnesty International.

Amnesty noted that the real number of deaths in custody is likely much higher given the lack of transparency in Iran’s justice system and the fact that many human rights violations go unreported due to widespread fear of reprisal and systematic repression of civil society.

Dozens of political prisoners are among those who have perished in Iranian prisons, according to the report.

Jailed protester killed after being injected with ‘wrong medication’ in prison