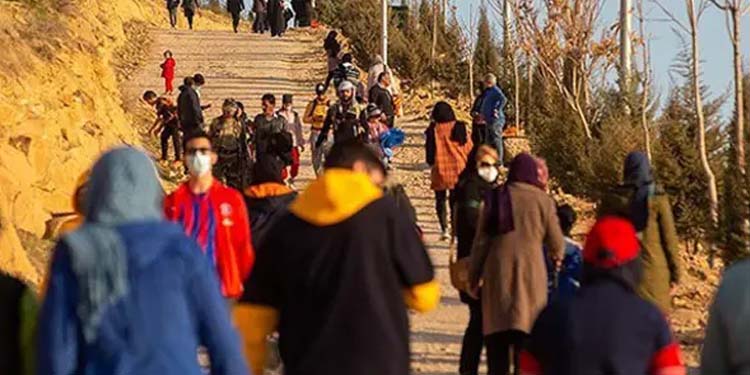 The Chief Justice of the northern province of Mazandaran said 120 Iranian tourists were arrested for “breaking the norms”.

State-run media quoted Mohammad Sadegh Akbari as saying on June 19 that the detainees were part of an “illegal” tourist tour who were arrested in a forest in Neka by moral security police. He did not mention when they were arrested but said the men and women were being prosecuted.

According to Akbari, the detainees had “installed satanic banners”, were “drinking alcohol”, had “illegitimate relationships”, were engaged in “mixed-gender dancing” and had “taken off their hijabs”, all considered crimes that merit severe punishment according to Iran’s Islamic laws.

The arrest of the managers of tourist tours and tourists, the closure of tourism centers for holding parties, dances, and putting on music, and even hosting water fights has a long history in Iran.

The Chief Justice of the southern province of Hormozgan on April 8 said that the public prosecutor had taken on the case of “mixed-gender dancing” in two eco-lodges in the Qeshm and Hormoz islands and had pressed charges against the owners of the lodges.

The Prosecutor of Boshruyeh, a city in the Southern Khorasan Province in northeastern Iran, in early December 2021 closed down a tourism camp for “going against public decency and morality”, “not observing the hijab”, and “mixed-gender dancing”, among other things.

In early July of last year, a traditional hotel in the Markazi Province in central Iran was closed down because a number of the hotel guests had engaged in a water fight in the man-made pond outside the hotel.