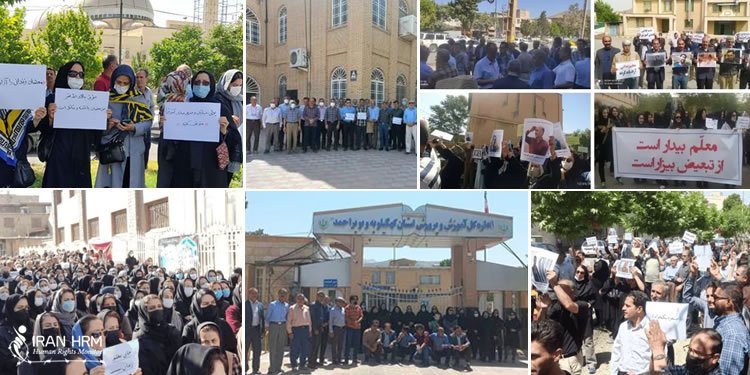 The teachers’ nationwide rallies have been held under a tight security atmosphere in various cities. Iranian teachers protest the detention of teachers and the non-implementation of the Teachers’ ranking Plan and adjustment of pensions.

As the Iranian regime has put pressure on activist teachers, they have recently arrested dozens of teachers. However, Iran’s teachers once again held nationwide protests with chants of “death to Raisi” and “free political prisoners,” despite a heavy security atmosphere.

Security forces tried to disperse the teachers and prevent their gatherings. In many cases, they used violence.

Security forces arrested dozens of teachers on June 15 and 16 to prevent the fourth nationwide gathering of teachers in protest of the continued detention of members of the teachers’ associations in various cities.

Despite the widespread arrest of teachers and the heavy presence of security forces, teachers took to the streets in different cities. They called for the release of their imprisoned colleagues.

In Tehran, the teachers were to gather outside the parliament. However, they could not do so due to the heavy security atmosphere and many security forces.

Participants in the Tehran rally said a state of siege was in force outside the parliament. The State Security Force parked their vans in a vast area.

In Marivan, security forces dispersed the teachers who had gathered outside the Department of Education.

In Andimeshk, Bukan, and Najafabad, teachers held their gatherings while holding placards.

In Mashhad, security forces prevented the teachers’ protest gathering. It is said that a teacher who was filming the incident was arrested.

A group of teachers held a gathering in Sanandaj. The city’s atmosphere was tense, and security forces prevented their picket.

In Sari, teachers took to the streets in solidarity with the teachers’ nationwide protest rallies.

Meanwhile, the Coordinating Council of the Teachers’ Associations announced the arrest of more than 100 teachers in various cities following the rally.

Sixty teachers were arrested in Shiraz, about 30 teachers in cities in Kurdistan province, ten teachers in Qazvin, six teachers in Rasht, and three teachers in Khomeini Shahr during a nationwide rally on Thursday, June 16. The Telegram channel of the Coordination Council of Iranian Teachers Associations announced the news.

The arrest and harassment of teachers continue in prisons. More than 200 teachers have been arrested in various cities since the new round of teacher protests started. Security forces have arrested at least 150 teachers in the last two months.

In the final days of the previous week and simultaneous with the fourth nationwide rallies of teachers this spring, security forces arrested 32 teachers in Marivan, Sanandaj, Saqqez, and Divandarreh.

Before this, Shaban Mohammadi, Eskandar Lotfi, Massoud Farhikhteh, and Jabbar Dousti had been arrested in Kurdistan.

Judiciary organs and security services have accused the arrested teachers of “having contact with foreign forces.” Based on the meeting of some teachers with two members of the Education Union in France, the charge has increased pressure on teachers under interrogation in Tehran and Marivan.

Security forces took Eskandar Lotfi, spokesman of the Coordination Council of Teachers, to an undisclosed location on June 10. He went on a hunger strike in protest.

Also, in Tehran, security services have detained Jaafar Ebrahimi, Rasoul Badaghi, and Mohammad Habibi since April 30. They have been in solitary confinement since June 13.

The warrant for the detention of Habibi and Ebrahimi has been extended. Rassoul Badaghi has been sentenced to five years for a new case opened for him.

According to the Coordination Council, the security forces and law enforcement agents have failed in forcing the three detained teachers into making televised confessions. They have now incarcerated them in solitary confinement to increase the pressure on them.

Ten teachers arrested in Saqqez announced they would go on a hunger strike at noon on June 19, 2022. They did so to protest their continued illegal detentions and failure to attend to the teachers’ righteous demands. They were arrested in the teachers’ fourth nationwide gathering on June 16. Khaled Abdullahi, Soleiman Abdi, Ahmad Qaderi, Amanj Amini, Zahed Moradi, Esmail Reyhani, Hessam Khakpour, Taher Hamedi, Mohsen Shokouhi, and Hassan Rahimian were the teachers arrested by security forces in Saqqez from June 15 to 17.