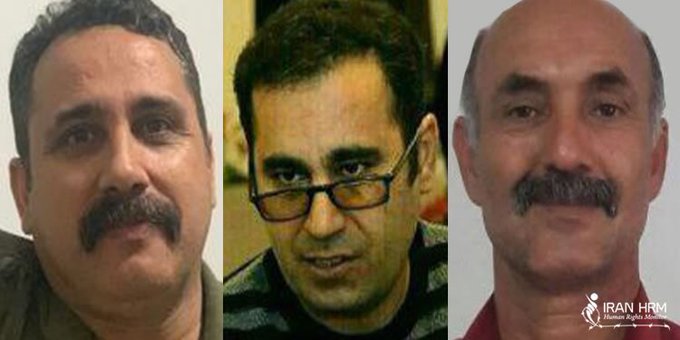 Three Iranian teachers are kept in limbo in Tehran’s notorious Evin Prison. Jafar Ebrahimi, Mohammad Habibi, and Rasoul Bodaghi were arrested on April 30 and transferred to Evin’s section 240 known as the Ministry of Intelligence Detention Center.

According to an informed source, Rasoul Bodaghi last spoke to his family on the phone on June 11, and since then, his family has been in the dark about his situation.

“On June 22, the families of the three teachers went to Evin prison to see them, but the prison officials did not allow them to meet. Also, the books that their families brought for them were not accepted by prison,” the source added.

On June 14, Mr. Ebrahimi, Mr. Habibi and Mr. Bodaghi were transferred to the solitary cells in Evin Prison’s Section 240. Mr. Bodaghi was previously transferred from this detention center to the general ward of Evin prison on June 2.

On June 1, the detention order for Mohammad Habibi was extended for another month despite the promise of the investigator of the case that he would be temporarily released. Earlier, a source familiar with Mr. Habibi’s case said that he was charged with “propaganda against the state”. Jafar Ebrahimi was supposed to be released on bail on May 29, but intelligence agents have prevented his release.

On the eve of teacher’s week in Iran, several teacher activists were summoned by security agencies, and some were arrested. On May 1, working and retired teachers gathered outside the education departments in more than 40 cities to protest the non-consideration of their demands, and several union activists were also arrested.

In late May, the sentence of Rasoul Bodaghi was confirmed by Branch 36 of Tehran’s Court of Appeal. According to the verdict, Mr. Bodaghi was sentenced to 4 years in prison for the charge of “assembly and collusion” and one year in prison for “propaganda activities against the state” and as an additional punishment, he was banned from leaving the country and banned from living in Tehran all the neighboring provinces for two years.

Earlier, on April 4, the first session of the court against Rasould Bodaghi and Hamid Qandi was held in Branch 26 of the Revolutionary Court of Tehran. He was sentenced to imprisonment in court.

The teacher activist was arrested by the security forces in his home on December 11, 2021 and was released 10 days later posting bail.

Mr. Bodaghi was beaten upon his arrest and security forces did not allow him to wear proper clothes and confiscated all of his communication devices as well as his wife’s cell phone.

Jafar Ebrahimi and Mohammad Habibi have previously been arrested and convicted for their activities. Mr. Ebrahimi was sentenced to 4 years and 6 months in prison by the Revolutionary Court of Karaj in January. On November 10, 2020, Mr. Habibi was released early from Tehran prison after serving a 30-month sentence. He was summoned to the security police again in January after receiving a notification.

Political prisoners hold sit-in to gain their right to visitations