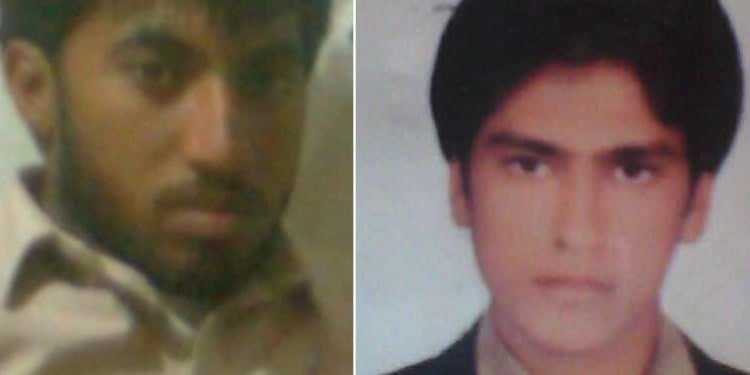 Baluch political prisoners Mohsen Ghanbarzehi (right) and Einollah Ghanbarzehi (left) who were executed on September 1, 2022, at the Central Zahedan Prison.

Baluch activists reported that two political prisoners, one of whom was a child at the time of his arrest, were executed today at the Central Zahedan Prison.

The two Baluch political prisoners Mohsen Ghanbarzahi and Einollah Ghanbarzahi, were executed on Saturday, September 3, two days after being taken to solitary confinement.

The two, who were relatives, were arrested in 2012 on charges of “acting against national security, collaborating with anti-state groups, and murdering three officers” and were sentenced to death by the Zahedan Revolutionary Court presided over by Judge Mahdovian.

According to Baluch activists, Mohsen Ghanbarzahi was born in 1996 and was 16 years old when he was arrested in 2012.

Both prisoners were severely tortured after their arrest and forced to confess against themselves during their detention in the solitary cells of the IRGC intelligence detention center and were denied access to a lawyer and contact with their families.

In 2019, in a letter from Zahedan prison, these two prisoners revealed human rights violations and various forms of torture imposed on prisoners.

In a part of the letter, which was signed by a number of prisoners, they wrote: “Several Baluch prisoners have been kept handcuffed and shackled in the IRGC detention center continuously for seven months. Hanging the prisoners by their feet for hours is another form of torture and was carried out by IRGC intelligence. In order to obtain forced confessions, the IRGC agents buried Einollah Ghanbarzahi neck-deep.”

Activists have long expressed concern that executions in Iran disproportionately target members of Iran’s ethnic and religious minorities, notably Kurds in the northwest, Arabs in the southwest, and Baluch in the southeast.

There has also been concern over a recent upsurge of executions in Iran, as the regime’s leaders are confronted with protests over the increase in prices for basic goods.