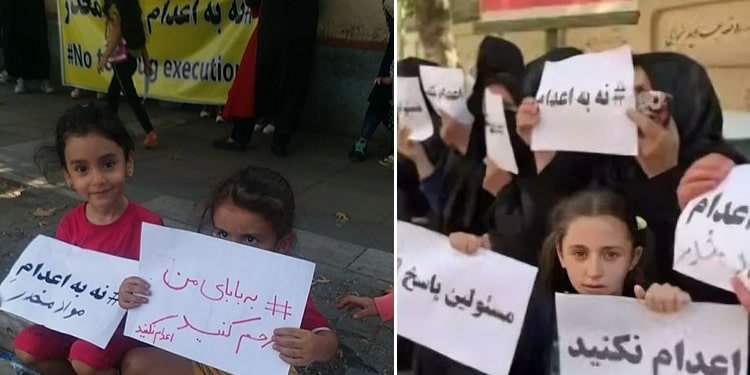 The families of death row prisoners held the third day of their protest gathering on Thursday, September 8, 2022, outside the Judiciary in Tehran. With the slogan “Don’t execute,” they demanded the Iranian Judiciary stop the execution of their loved ones.

The families of death row prisoners, including their old mothers, wives, and children, protested the widespread executions in Iran’s prisons.

One of the participants in the third-day gathering of the families of death row prisoners in Tehran said:

Whatever they killed is enough. How much longer should we mourn our loved ones? How much longer will they kill us, and we should say nothing? Do we deserve to be poor? Does anyone have any sense of our poverty? No one wants to understand what it means when you don’t have anything. We mourn the best children of our homeland. We are mournful. Our clothes are black. We don’t want them to kill anyone else after this.”

The Judiciary has not given any answer to the families of death row prisoners, despite three days of families gathering in Karaj and Tehran.

The gatherings were held after human rights organizations announced the execution of eight prisoners on Wednesday, September 7, in Gohardasht (Rajai Shahr, Karaj) and Bandar Abbas prisons.

Many death row prisoners face imminent execution, and their families have become worried and concerned after the implementation of the death verdicts was accelerated. They have protested against the death penalty for their loved ones.

In the first year of Ebrahim Raisi’s presidency, we see a significant increase in executions throughout Iran.

Iran Human Rights Monitor calls on international organizations and the United Nations, the European Union and its member states to condemn the Iranian regime and compel it to stop the implementation of death sentences in Iran.

The dossier of Iran’s human rights violations must be referred to the UN Security Council, and the regime’s leaders, including Ali Khamenei and Ebrahim Raisi, must face justice.