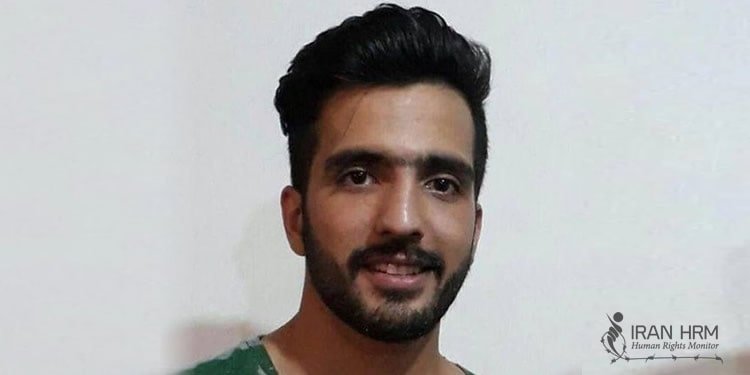 Farhad Ghahremani who has been arrested for demanding a halt to executions in Iran was taken to the Investigation Unit of Iran’s police (Agahi) where he remains at risk of torture and other ill-treatment.

Iranian security forces have arrested Farhad Ghahremani, a 22-year-old man who was attending a protest rally against the death penalty before the Parliament on September 11.

Farhad Gharamhani was charged with “assembly and collusion through the leadership of gatherings” and was interrogated in Ward 209 of Evin Prison, which is controlled by MOIS.

According to informed sources, Farhad Gharamani was transferred from Evin prison to the Agahi detention center on September 15.

Before being detained Farhad Gharamani delivered a fiery speech during the gathering of families of death row prisoners against the regime’s use of executions.

He said: “We are victims of poverty. Our loved ones have been drawn to this way due to poverty, we demand the right to life for them. Their death sentences should be revoked. No one should die. We do not want any of our loved ones to be killed again. We have been wearing black clothes for years. We don’t want anyone else to die. No human being deserves to be executed.”

Farhad’s father, political prisoner Mohammad Taghi Ghahremani, was executed in 2011, and his brother and cousin have been imprisoned for taking part in 2019 protests.

Several families of prisoners who have been handed death sentences protested for several days in Tehran last week.

In videos of the protests, police officers can be seen dispersing the demonstrators, arresting some of them.

In response to the arrests, families cried out, “We are here to save the lives of our loved ones. Detaining us is not the correct answer. We demand a reduction in the death sentences!”

The families of death row prisoners chanted, “Do not execute!”

Ebrahim Raisi’s first year of the presidency has seen a significant increase in executions throughout Iran.