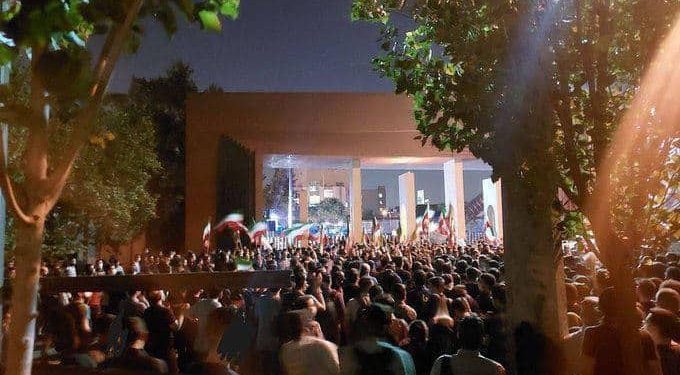 The violent crackdown on Tehran’s elite students led to massive protests across Iran.

Students at the Sharif University of Technology in Tehran were locked inside the university’s parking lot by state security forces on October 2, 2022.

The Sharif University of Technology is one of the world’s best universities and admits elite students.

Numerous videos by eyewitnesses and students demonstrate the horrific attack on the students who tried to find a safe exit. Security forces used pellet guns and live ammunition against the trapped students and injured many.

The tense situation continued in Sharif University throughout the night, with parents, family, and locals gathering to support the attacked students and demand their release.

The Iranian authorities dispatched additional groups of security forces to crack down on the growing crowd of people by using teargas and bullets.

Reports indicate that many students were injured and arrested. Reportedly, the detained students have been transferred to a military garrison in Afsarieh.

At the same time, students remaining on campus held protests demanding the security forces open the university’s gates and let them go.

The students had held a massive anti-regime rally on campus on the evening of Sunday, October 2, before being attacked by security forces, chased into the parking lot, and rounded up.

Students held peaceful protests in dozens of universities across Iran on October 3, in the wake of the violent crackdown on Sharif students in Tehran. They included the universities in Tehran, Isfahan, Zanjan, Semnan, Urmia, Kermanshah, Tabriz, Qom, Mashhad, and Birjand.

Security forces fired tear gas inside the campus of Isfahan University in another attempt to silence the young protesters.

Students holding these protests chanted, “Students are awake” and “Death to the dictator.”