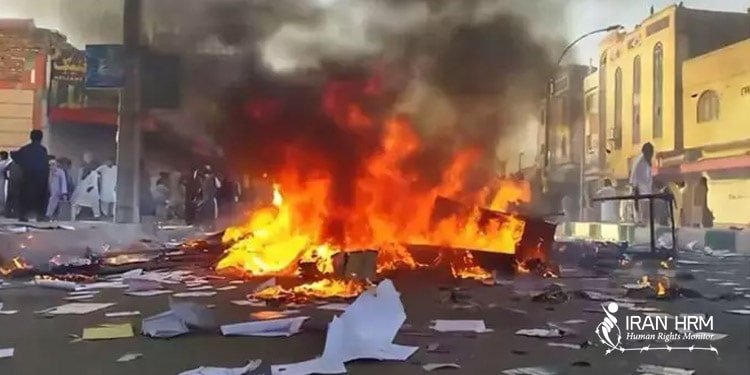 At the Makki Mosque on Friday, September 30, 2022, the Revolutionary Guards opened fire on prayers killing at least 58 people. This brutal act led to protests by the people of Zahedan in Sistan and Baluchistan Province.

Dozens of worshipers remain injured, and protesters chanted “Death to Khamenei” to indicate the perpetrator of the crime. Youths and locals from various cities gathered to take part in the protests and to condemn ongoing human rights violations even after the tragic death of Mahsa Amini.

Sounds of gunfire were heard throughout the various cities and many disturbing scenes started to circulate on social media. The Revolutionary Guards flied helicopters over the furious crowd to try and disperse them to control the situation.

The Iran Human Rights Monitor urges the U.N. and its member states to take urgent practical action to stop the slaughter of protesters.

The city of Zahedan has encountered numerous civil attacks during different periods and suffered severe killings. The scope of the massacre on Friday was so appalling that the Iranian official IRNA news agency reported: “over 19 people killed and 15 injured.”

Local activists are reporting more than 100 people were killed and injured by security forces as they opened fire on worshippers in the city’s Makki Grand Mosque.

Amnesty International with great concern published a report on September 30, 2022, stating Iran’s further plans to crack down on protesters. It said Iran’s highest military body instructed the commanders of armed forces in all provinces to “severely confront” protesters who took to the streets following the death in custody of Mahsa Amini at the hands of Iran’s morality police, Amnesty International said after obtaining leaked official documents which revealed the authorities’ plan to systematically crush the protests at any cost.

The State Security Forces have killed hundreds of protesters and arrested thousands across the country. However, protests continue to rage with the continuous presence of women activists and the active role of students who call for their friends to be released.