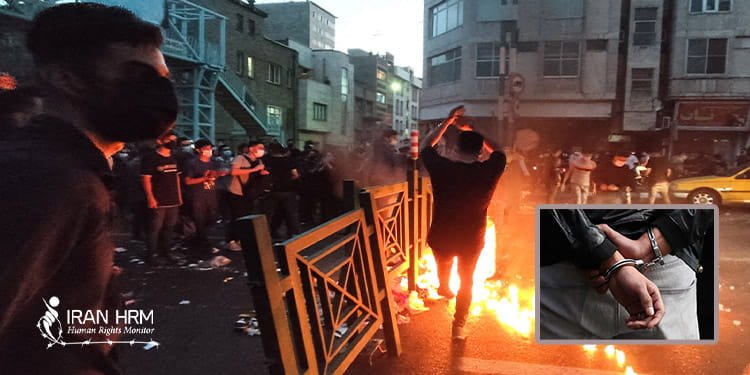 Tehran’s General and Revolutionary Court held its first hearing on the cases of six protesters on Saturday, October 29, 2022.

Both charges are punishable by death under the Iranian regime’s law.

In another development, Branch 101 of the 2nd Penal Court of Sardasht issued prison sentences and fines for six protesters arrested in Sardasht. Sardasht is located in West Azerbaijan Province, northwestern Iran.

The six protesters were sentenced to three years, four months, and one day of prison each. Everyone was also sentenced to 148 lashes and 7.5 million Rials of fine.

Another 1,019 protesters indicted in six provinces

The head of the Justice Department of Zanjan Province announced on October 26, 2022, that his department had issued indictments for 119 protesters arrested and detained during the recent protests in Zanjan.

On the same day, Ebrahim Hamidi, the head of the Justice Department of Kerman Province (southern Iran), announced that they had issued indictments for 25 protesters arrested during the protests in that province.

The Judiciary’s official website also reported another 89 indictments in Semnan Province, 105 in Khuzestan, 55 in Qazvin, 110 in Kurdistan, 315 in Tehran, and 201 in Alborz Province.

Authorities engaged in a violent spree to round up Iran protesters

The Revolutionary Guard Corps (IRGC) and the State Security Force (SSF) agents launched simultaneous attacks on Saturday night, October 29, on several student dormitories and universities in Tehran and other cities.

They brutalized the students and arrested a considerable number of student activists.

On Friday night, October 26, the SSF broke into the Sadaf student dormitory in Golestan, Ahvaz, and took away four students of Jondishapur University.

The security forces also arrested at least 60 citizens who participated in the memorial ceremony for Nika Shakarami in a remote village near Khorramabad, the capital of western Lorestan Province. There is no information available on the whereabouts of those arrested.

Members of the Iranian parliament passed an emergency bill on Sunday, October 30, increasing the wages of its armed forces and military personnel by 20%.

Ironically, Iranian teachers and pensioners have been protesting for two years to earn an increase in their salaries without achieving their objective.