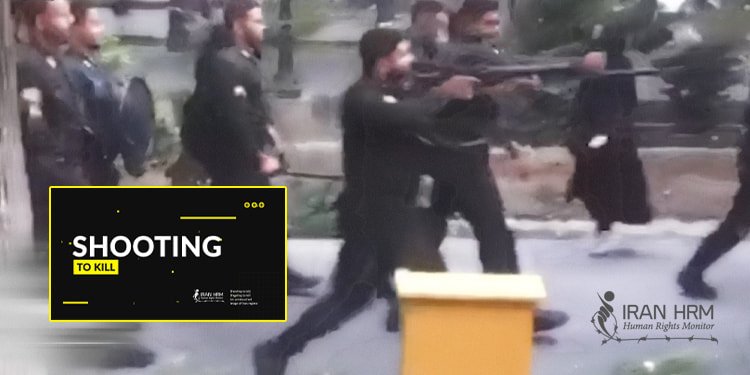 The state security forces and plainclothes agents in Iran have been using brute force and obvious violence against protesters on the streets of Iran since September 17, 2022.

The Revolutionary Guards’ (IRGC) commander has claimed that they only use non-lethal weapons to contain the protests. But evidence shows extra levels of violence against the people and protesters. The goal is not to control the people but totally aimed at killing them. On several occasions, non-lethal weapons such as batons have been used so radically that it has killed protesters.

The present report is a brief overview of how the Iranian security forces and plainclothes officers confronted protesters and how some of these civilians were murdered.

A protester beaten by tens of riot police

In the most recent instance, revealed in late October, state agents shot a protesting citizen in Tehran’s Nazi Abad neighborhood from a close range. This was after a group of riot police attacked and drove over him with a motorbike. The video provided from this scene brought public outrage and abhorrence, leaving no room for denial for the Iranian authorities. Cyberspace users in Iran have called the film an unretouched image of Iran regime.

What happened in Nazi Abad is an example of the common practices used by Iran’s officials to deal with protesters. Luckily in this one case, someone managed to film the crime scene.

State agents strongly prevent anybody from filming their crimes on the streets in Iran. Dozens of Iranians have died just for filming the violent crackdown on protesters with their mobile phones.

Shirin Alizadeh, who recorded the moment of her own death, was in her car filming a crime scene. On September 22, 2022, near to the Abbas Abad Security Forces’ Base, in North Iran, protesters were being shot.

She was staying at the Motel Qu, in the coastal city of Abbas Abad, opposite the base. A sniper took a deadly shot at her from the roof of the base. Shirin died in the front seat of her car.

Shirin Alizadeh was 35 years old and a mother of two children.

Weapons of violence against peaceful protesters

State forces in Iran fire the shotguns with pellets as alternatives to live ammunition against protesters. This use of arms is an act against international laws. A shotgun is not only considered a deadly weapon, but it accidentally harms anyone in its range. Children and the elderly are all possible targets, even passers-by and those who may not be participating in protests.

The shotguns used in recent protests by Iran’s security forces are usually Pump-Action M2 and Benelli M2 and M4, all of caliber 12.

The slug bullets are a large leak bullet fired by the 12-caliber shotguns. These bullets are designed specifically for hunting large animals such as deer and boars.

The pellets are deadly, especially if they hit sensitive areas of the body from near distance. Parts such as the head, neck, and chest. Far more dangerous and deadly than pellets though are the slug bullet.

In one instance, a young woman referred to the Moral Security Police in Karaj to track down the condition of her detained brother. She was shot by security forces from inside the building entrance. The four large gunshot wounds on the woman’s body are slug bullets fired at her by shotguns.

Firing a shotgun at somebody with Birdshots from close range, will disperse all the small pellets in the victim’s body. The balls will penetrate the human body, and this is, yet the smallest of the bullets loaded. The birdshot can cause body tissues to disintegrate and either case will lead to death.

Shotguns can fire 20 to 80 pellets at a time. This is a hunting rifle used to kill a boar and is not considered a regular shotgun.

In a photo of a Saqqez citizen, at least 187 birdshots are seen covering his body. Viewing the wound size, the birdshot pellet is 38mm. With each cartridge shot, 77 pellets are released. This citizen was shot at least twice with a semi-automatic shotgun. The pellets have hit him all in the back, meaning he was trying to escape, but even so he was targeted.

Photos posted by the Kurdistan Human Rights Network (KHRN) showed the CT scan images of a female protester. She was seriously injured during recent protests in one of Kurdistan Province’s cities. She had been targeted by anti-riot forces who had shot pellets at her. The image of her skull makes it evident that her entire head and skull has been shot with pellets.

Shooting directly at the head and face of a citizen is unprecedented and frightening. This case completely proves the state forces’ aim of shooting with the intention to kill. This is one of the most shocking images of popular protests in Iran. This volume of pellets in these dimensions in one’s body is only the result of firing from a 1-meter distance.

Abolfazl Adinehzadeh joined the protests from outside the Ferdowsi University of Mashhad on October 8, 2022. The state forces struck his neck with an electric shocker. When he fell to the ground, they shot 24 pellets to his stomach from a 1-meter distance. Abolfazl Adinehzadeh died in hospital an hour later.

Kumar Daroftadeh, a 16-year-old Piranshahri teenager, died on October 31, 2022, when security forces fired pellets at him.

Repressive state forces even shot protesting students with pellets. On October 26, 2022, a student near Tehran University’s School of Mechanical Engineering in Amirabad, was shot in the head, neck, as well as one eye.

To arrest a protester, Karim Mohammadi, at least 20 plainclothes motorcyclists, along with a car, came to his house. They went inside from the front door to kidnapped him and have taken Karim to an unknown location. Citizens who witnessed the arrest said those who intended to intervene to save the protester were shot by pellet guns from short distances and beaten badly.

A 12-year-old child named Amir Abbas Arzhang was shot from a silver car in front of the Khedri school in Karaj on Saturday, October 29, 2022. His eyeball was enucleated, and a pellet remains in his head while Amir has not yet regained consciousness.

At least 41 children have been killed in recent protests in Iran. Most of them were killed by live ammunition and pellet guns. 10 of these victims are Baluchi children who were killed on the bloody Friday, September 30, 2022, in Zahedan. 7 of the victims were shot in the heart, head, or other vital organs.

The state security forces in Iran, despite claiming that they do not use live ammunition, have only used combat bullets to crackdown on protests in border cities such as in Zahedan.

Momen Zandkarimi, who had just turned 18 was shot in the shoulder on Wednesday, November 2, 2022. He had been shot with live ammunition in Sirous St. in Sanandaj and died hours later in Sanandaj’s Tohid Hospital. Momen was severely injured and died from hefty bleeding.

Plainclothes officers shot a driver, Yahya Rahimi, in the head from half a meter away. Yahya was killed with a combat bullet. The 31-year-old’s harrowing death was posted on social media. The scenes show blood splattered inside his car and Yahya’s face torn apart. This young man had not participated in protests and was only beeping in support of the protesters.

During the protests in Sistan and Baluchistan, protesters are shot with live ammunition. 91 civilians were killed on the first Bloody Friday alone, September 30, 2022. State agents brutally shot protesters in the head and chest.

On Friday, October 28, 2022, the regime’s criminal forces fired at protesters in the city of Dezap, Zahedan. At least 3 children under the age of 18 were shot and killed. A 12-year-old boy was killed by a combat bullet shot to his head.

On Friday, November 4, 2022, protesters took to the streets in Zahedan, Saravan, and Khash. They chanted slogans against the totality of the regime. State suppressive agents opened fire at protesters. The situation in Khash was critical. By midnight, the number of killed people in Khash was at least 20 and 60 others injured.

Encircling wounded protesters until they die

The Iranian people come to the streets only to protest, but security forces fire at them with live ammunition. One of the forces stands over the shot protester and shoots at whoever coming to save him. Eventually the injured protester dies of hemorrhage. This is a routine that is repeated every day in Iran and dozens of protesters are murdered in the same way.

Erfan Zamani was shot and wounded by a combat bullet in Lahijan on November 3, 2022. Security forces prevented others from helping him and stood over his head till he died from bleeding.

On September 21, 2022, security forces fired 3 shots from close range into the heart of Behnam Layeqpour. He falls to the ground with his face, but this was not enough for the state forces. The guard who shot Behnam came down from his motorbike and stood beside Behnam with a gun in his hand. He did not let anyone near Behnam and stood there watching him die. Behnam’s friends who tried to approach him for help were beaten with batons.

Sasan Ghorbani, 31, was shot and killed in Rezvanshahr on September 21, 2022. He was helping a protester who was wounded by a pellet gun. Sasan was shot by a combat bullet and died within hours.

Mohammad Javad Zahedi, 20, from Sari, is shot in the head, neck, and back. His body was targeted with live ammunition on September 21, 2022. People who rush to save him are held back.

What the international community should do?

According to international law, the definition of “having the intention to kill” is equal to the murder itself! What matters to the court and the jury is the motive for the murder, not the murder itself. As a result, an armed mercenary who comes to the street and is not directly responsible for shooting a protester, is considered a criminal for intending to kill a civilian. The intention is enough to make the act a crime of intentional homicide and to prevent mass murder, the criminal must be arrested.

The international community must not tolerate the deadly repression and killing of unarmed protesters.

Iran Human Rights Monitor urges the United Nations, The High Commissioner for Human Rights, the Human Rights Council and the Special Rapporteur on Human Rights in Iran, and all human rights organizations to take immediate action. They must send a fact-finding mission to Iran to investigate Iran’s illegal actions and the killing of innocent and unarmed protesters by authorities.