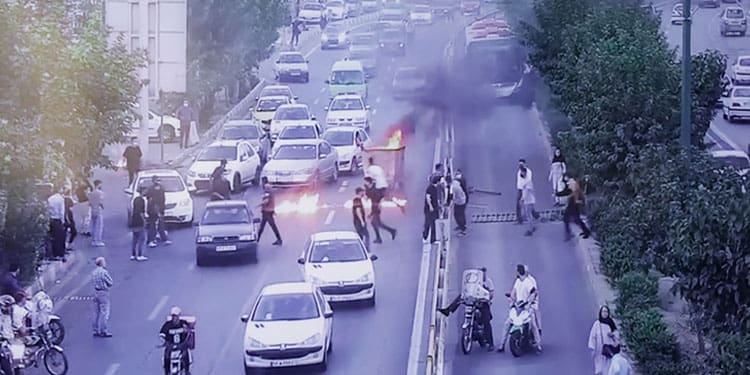 The prosecutor’s representative said, the defendants had participated in protests in Tehran on September 23, 2022. Sahand Noor Mohammadzadeh had blocked the Ashrafi Esfahani Expressway was for some time and caused traffic. He managed to block the highway by pulling out the guard rails and setting fire to garbage containers as well as car tires.

The prosecutor’s representative added, Ali Hooshmandi Fotovat delivered five vehicle tires and industrial alcohol to Sahand Noor Mohammadzadeh. This was to create fire on the Ashrafi Esfahani Expressway and block the way of passing cars. He joined other defendants to set fire to garbage containers. Ali Hooshmandi Fotovat also set fire to a banner and acted against the state in cyberspace.

Charges of moharebeh can result in heavy sentences, including execution.

Sahand Noor Mohammadzadeh, born in 1996, was charged with ‘moharebeh’ (waging war on God) for destroying public property. Setting fire to garbage containers with aim to disrupt the country’s public order and security and to confront the state. Assembly and collusion with the intention of committing crimes against the country’s security and disturbing public calm by participating in illegal gatherings.

Ali Hooshmandi Fotovat, born in 1982, was charged with “propaganda against the state.” As well as “assembly and collusion with the intent to commit crimes against the security of the country,” and “disturbing public order and comfort by participating in illegal gatherings and destroying public property.”

Behdad Eskandarnejad, born in 1984, was charged with “assembly and collusion with the intent to commit a crime against the security of the country and disturbing public order and comfort by participating in illegal gatherings.”