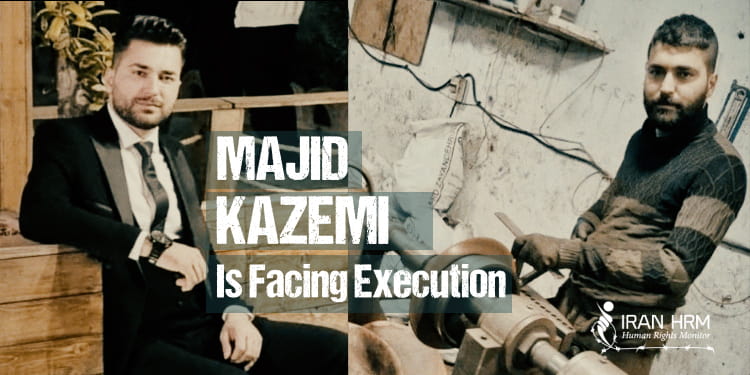 Majid Kazemi, 30, was born in 1992 and is a resident of Isfahan, though he is originally from the Lur tribe in western Iran. Majid was arrested on November 21, 2022, during nationwide protests in Isfahan and the court sentenced him to Moharebeh.
According to Mr. Kazemi’s friends, Majid loved nature and travelling to the countryside. He is very kind and hardworking. Majid began to work as a teenager and was able to set up a copper bending handicrafts workshop in Isfahan. He has created jobs for a number of people his age. Majid always helped those who were not in good financial condition. Majid Kazemi’s friends cannot believe that he pulled a gun! In an audio message from prison Majid Kazemi said he was tortured into confessing to things he had not done. He stressed, “I had no weapon, and I did not do anything. They beat me so much that I accepted it.”

On the evening of November 16, 2022, an armed attack took place in the Neghabani Square of Khane Isfahan neighborhood. Three Basijis, Mohsen Cheraghy, Mohsen Hamidi, and Mohammad Karimi were killed. Iran’s government officials claim that Mr. Kazemi was involved in the attack and arrested him for allegedly shooting at the three security agents.

After the defendants were arrested for armed assault, the Court of Appeals charged six defendants within four sessions on 28th, 29th, and 31st of December 2022. The sessions were held at Isfahan’s Provincial Courthouse and the defendants were sentenced with only four trial sessions.
Majid Kazemi Sheikh Shabani, son of Mohammad Reza, the second-row defendant in the case, was sentenced to death on charges of Moharebeh by possessing a Kalashnikov weapon. Majid was sentenced to 10 years imprisonment on charges of membership in illegal groups and communities with intent to disrupt state security as well as assembly and collusion resulting in crimes against state security.
Fortunately, Majid Kazemi had a public defender during the trial process, and an appointed lawyer objected to Majid’s death sentence.

Majid Kazemi’s family and colleagues posted a video message on Saturday, January 14, 2023, demanding the release of the young protester.
Majid’s grandmother described him as a kind and warm-hearted young man and his colleague said that five to six people work in the craft workshop he set up.
Majid Kazemi’s mother also described her son as “a prolific young man, a wrestler and the family’s breadwinner.” She urged Iranians for help to make authorities remove the noose from his son’s neck.

On Friday, January 13, 2023, Majid Kazemi said in an audio message released from prison that he was tortured to testify against himself.
He said, “I had neither a gun nor anything else. I was forced to say it under torture… They hit me and told me to say the gun was mine. I accepted. They beat me up and said we have to go to recreate the crime scene, I accepted. They beat me up and said I have to say all this in court… It was all done under torture. If not, I neither had a gun nor did I do anything.”
Prior to Majid Kazemi’s own emphasis on confessions made under torture, some reports indicated that he had been beaten at all stages from detention to trial.
According to an informed source, after revealing the truth in his family contact, Majid Kazemi was denied phone calls and visitations. Prison authorities also transferred him to a ward with less facility.

The Chief Justice of Isfahan Province claimed, “Majid Kazemi, one of the defendants in the case, has been transferred out of the public ward because of his actions in prison. The new ward is not solitary confinement and there are about 10 to 15 prisoners held there. He has only been removed from the public ward.”

The Chief Justice continued, according to the law, defendants have 20 days to appeal the sentence after the verdict is issued in a lower court. The defendants in the Khane Isfahan case have also been given the opportunity to appeal if they object to the court’s ruling.

Families of the defendants in the Khane Isfahan case have been warned that the more they speak in the media about their loved ones, the sooner they will be executed. Majid Kazemi, Saleh Mirhashemi, and Saeedi Yaqhoubi have been under severe torture and forced to confess against themselves. They have been sentenced to death without evidence.

Javaid Rehman, the United Nations Special Rapporteur on the situation of human rights in Iran, warned that the Islamic Republic was waging a campaign of executions to quell the nationwide uprising.