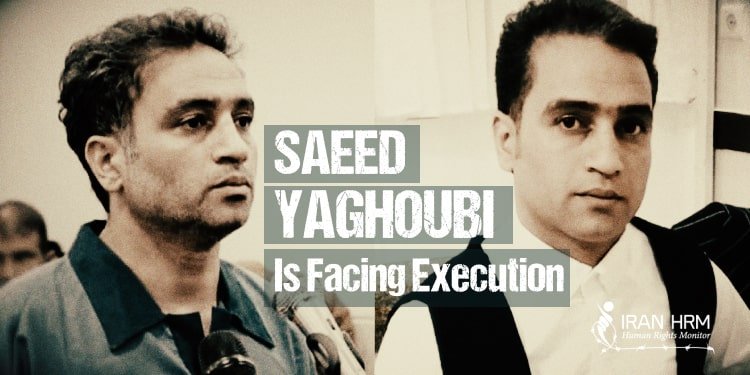 Saeed Yaghoubi, 37, is from Isfahan, the youngest child of the family, and the caretaker of his 81-year-old mother and 85-year-old father. During the nationwide protests in Isfahan on November 18, 2022, Iran’s Judiciary arrested and sentenced him to death. Saeed Yaghoubi was an athlete and worked at the real estate firm in Khane Isfahan’s neighborhood.

On the evening of November 16, 2022, during the Protests in Isfahan, two Basiji members and one security officer, who were involved in suppressing the protesters, were shot dead in the “Negahbani Square of Khane Isfahan Neighborhood.” Iran’s Judiciary has claimed that the detained protesters linked to the case “shot” the three security agents, Mohsen Cheraghy, Mohsen Hamidi, and Mohammad Karimi dead. Saeed Yaghoubi is the third defendant in this case.

Saeed Yaghoubi Kordsafali, son of KaramAli, the third defendant in the case, was sentenced to death for waging war on God (Moharebeh), by attempting to pull a gun and using a waist Colt. Saeed Yaghoubi is also charged with 10 years in prison on charges of membership in illegal groups and communities with the intent to disrupt state security, and assembly and collusion resulting in crimes against the country’s internal security.
The Judiciary has stated that the sentences handed down for the defendants were “preliminary rulings and can be appealed by the Supreme Court.”

The death sentences against Saeed Yaghoubi and two other defendants in the case have been carried out without due process and legal standards. All rulings given were based on forced confessions carried out under brutal torture that cannot be invoked. In a phone call with their family, the two other defendants said they were forced to confess under torture.

Not much information about the condition of this detained protester exists, and no phone call from or with the defendant is out.
According to a close source who was present at court and saw Saeed, he attended the court in a worrying and distressed state. His hair had turned white, whereas Saeed’s hair was not white before, and his face appeared older. It was evident that he had been brutally tortured for forced confessions.

In a video posted online on December 20, 2022, Saeed Yaghoubi’s mother said that her son was arrested on November 18, 2022, while working at a real estate firm in Isfahan. She had not been informed about his arrest for more than a month.
In another video posted on social media on January 10, 2023, the mother calls for the release of her son. She said Saeed was the “breadwinner and handyman” of their home. She says that she has no one else apart from Saeed.
“An 85-year-old father, an 81-year-old mother… This is their son Saeed, their breadwinner and handyman. Please accompany my child and bring him back to me.” Saeed cared for his elderly parents and with his imprisonment, his family is left without help.

More than 30,000 Iranians were arrested during nationwide protests in Iran that began on September 16, 2022. At least 109 protesters are at risk of being executed or issued death sentences.