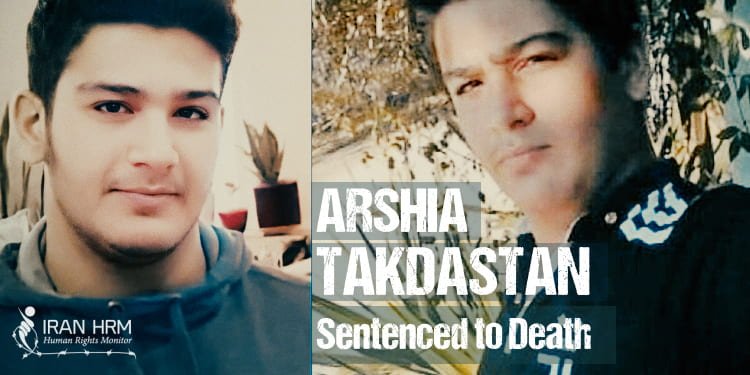 Arshia Takdastan is an 18-year-old citizen from Nowshahr, north of Iran. Arshia was born on June 13, 2004. He was accepted to the national entrance exam in electronic engineering and was scheduled to go to university from September 24, 2022. But the Revolutionary Guards-IRGC’s intelligence agents arrested him on their way to class at Nowshahr’s Azadi Square. Iran’s Judiciary has sentenced Arshia Takdastan to death.

According to the statement issued by the Revolutionary Court of Mazandaran, Arshia Takdastan has been charged with Moharebeh and Corruption on Earth. The reasons include committing extensive crimes against the state’s security and destroying property in ways that severely disturbed the country’s public order. Causing insecurity and major damage to public property, destruction, creating fire and vandalizing public property and facilities. With aims to disrupt the society’s security and to confront the Islamic government. Inciting citizens to cause insecurity, assembly and collusion to commit crimes against the state’s security.

The statement also found the defendant has played the main role in guiding and leading rioters (protesters). In messages exchanged by the defendant with his friends online, he said, “We’ve made a big scene in Chalus and Nowshahr,” “I hit a NAJA (Law Enforcement Command) agent in gatherings.”
Iran’s Judiciary has claimed that as a result of these protests, an amount of almost 40 billion Tomans worth of damage was inflicted on public places including 15 banks and also, buildings belonging to the state security forces, the traffic police, the municipality, the fire departments, the governorate, and the city’s government office.

An informed source close to the Takdastan family said, “All confessions made during interrogations were obtained under harassment and pressure.”

“Arshia was arrested on September 24, 2022, in Nowshahr and transferred to Sari, the provincial capital of Mazandaran Province, the next day. “He was beaten so much in Sari Prison that he did not realize his big toe was broken. He had said that he felt severe body pain that he hadn’t noticed it at all.”

“Arshia was held in two-by-two solitary confinement in Sari Prison for 28 days and interrogated for hours. His family was uninformed of his condition during this time. Arshia was threatened and told that his father would be arrested. They had blindfolded his eyes and put a gun to his head.”

Arshia stutters. “Any kind of emotion in a time of fear or even great happiness makes Arshia’s stuttering worse. I’m sure he wasn’t able to yell out against all the harassment. He just signed everything they put in front of him. All this time, the family had no news of him.”

Arshia is kept in Chalus Prison before the verdict is issued and will be returned to Nowshahr Prison after the trial and sentencing process are concluded. He just pleas not to be taken back to Sari Prison.

Parand Mahmoudi, who is Arshia Takdastan’s niece living in the Netherlands, stated the facts. In a video put on social media on January 2, 2023, she said, “There was a very crowded gathering on September 21, 2022, in Nowshahr. There were over 3,000 people on the street. Arshia had a class that night at a school about a 15 minutes’ distance walk. He leaves the school at 19:30 p.m. and reaches the crowd at Nowshahr’s Azadi Square around 20:00 p.m. After about 20 minutes he reaches home at precisely 20:30 p.m. Now he has been charged with being one of the leaders of protests that occurred on September 21 in Azadi Square.”

She added, “He’s a child and had no part in the popular protests in Nowshahr. He was standing in a corner and watching. A few days later, they raided his father’s house and detained him. None of the allegations against him are true.”
Parand Mahmoudi states, “Arshia has been accused of inciting people to war and killings that led to the traffic police’s kiosk and several banks in Azadi Square to catch fire. Also, destruction of public property amounting to billions of tomans. But now that Arshia is allowed visitation, he told his family that within the half an hour he spent there, he only threw an empty bottle of Istak Beer at the kiosk and gave a lighter to a woman searching for matches.”

It was only these two acts by the 18-year-old that created such a case. He confessed to it whilst being under torture, persecution, and extreme pressure.