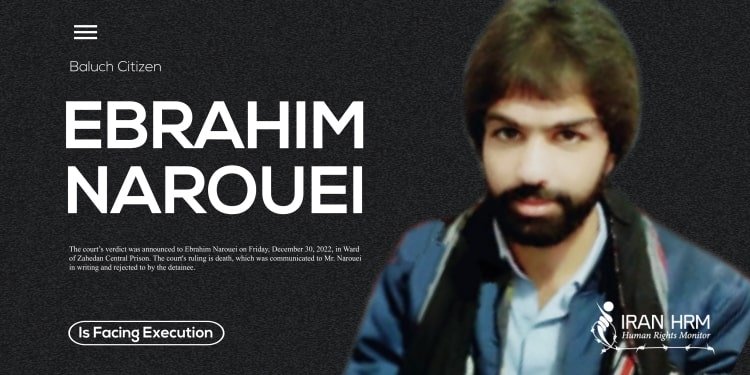 Ebrahim Narouei, a 25-year-old Baluch citizen from Zahedan born on July 16, 1988, was arrested by Iran’s plainclothes forces during nationwide protests on October 3, 2022, in Zahedan and sentenced to death by the Iranian judiciary on the charge of Moharebeh (War on God).

Ebrahim Narouei, son of Gol Khan and a resident of the Old Road area in Zahedan, was arrested in his neighborhood. After a week of brutal torture in the detention center, security forces made him confess to things he had not done. While blindfolded, he was forced to sign documents with his fingerprints, which he had not read any them. He was charged with Moharebeh by Branch 6 of the Revolutionary Court of Zahedan without an appointed lawyer and sentenced to death.

Ebrahim Narouei is charged with “destroying public property and setting fire to Saderat bank in Rajai region of Zahedan” on September 30, 2022. However, there is no proof of Ebrahim Narouei confirming the accusation. The court charged Mr. Narouei with Moharebeh on false charges all obtained under torture, which are not citable. Mr. Narouei has been in Zahedan Central Prison for more than three months based on the false charges and facing death without any proper court proceedings.

The court’s verdict was announced to Ebrahim Narouei on Friday, December 30, 2022, in Ward 9 of Zahedan Central Prison. The court’s ruling of “death,” which was communicated to Mr. Narouei in writing, which he rejected. The Implementations Department of the Revolutionary Court of Zahedan has stated if Ebrahim Narouei sentence is upheld by the Supreme Court, it will be carried out immediately.
This sentence was issued to Mr. Narouei without the presence of an attorney and none of the legal proceedings occurred in the courtroom. The case is full of fabricated accusations. Prior to this case, protest detainees in Zahedan, 18-year-old Shoaib Mirbaluchzehi Rigi, Mansour Dahmardeh, and Kambiz Kharoot, were sentenced to death.

According to Balochcampaign.us, images and videos taken during nationwide protests on December 2, 2022, illustrate that Iran’s plainclothes officers destroyed public property and set fire to banks and shops.
Iranian authorities want to quell peaceful public protests by arresting mass amount of Baluch youths and children and sentencing them to death through heavy charges. Following nationwide protests in Iran, including cities in Sistan and Baluchestan Province, many citizens as well as children under 18 have been arrested without reason and are deprived of any legal procedures. The fate of the majority remains unknown.

More than hundreds of Baluch citizens in Zahedan and Khash who protested the rape of a little girl, Maho Baluch, by the Chabahar (Chah Bahar) police chief in Zahedan, were killed by live ammunition and more than 400 injured. The day is remembered as the bloody Friday.
Hundreds of Baluch citizens have been arrested since the start of protests. According to Human Rights Organizations and Haalvsh.org, at least 120 detained protesters in Sistan and Baluchestan Province have been recorded from September 30, 2022, to the end of December 2022.