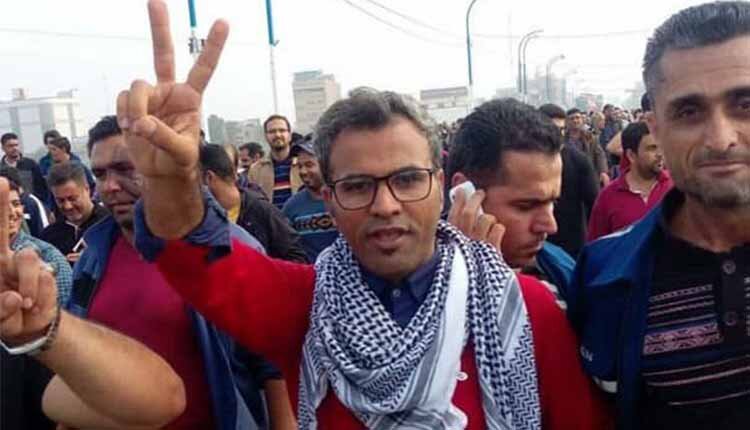 Human rights sources have reported that steel factory worker, Meysam Al Mehdi was arrested today at his home and was taken to an unknown location.

The workers of Iran National Steel Industrial group poured into the streets into the streets of Ahvaz today to mark the 32nd day of the strikes and the 24th day of their demonstrations, protesting delayed paychecks and officials’ corrupt policies.

The disgruntled workers, assert that they want their complex production line restored and overdue wages paid.

Earlier, the government officials had promised that the wages would be paid by November 30, but a representative of the protesters, Morteza Akbarian, reiterated that the promise had not been kept.

Ahvaz Intelligence Department have summoned at least 10 steel factory protesting workers and threatened them to be dealt with more seriously.

On November 20, Mosfata Nazari, the prosecutor of Shoosh County, told reporters that authorities have released 15 labor activists who were arrested during the protests.

The two, were beaten during interrogations at the Intelligence Ministry’s detention center in the Iranian city of Shush, Khuzestan Province, according to relatives who visited them on December 4, 2018.

“We have received reliable information that when Bakhshi and Gholian’s relatives … visited them for a short period they noticed that they had both been badly beaten and put under intense physical and psychological pressure,” said the Haft Tappeh Sugarcane Workers Union via a statement published on the organization’s Telegram channel.

Human rights sources have reported that the families of labor activist Esmail Bakhshi and civil rights activist Sepideh Gholian, have been left in the dark about their current condition a week after their last visit.

On Tuesday December 4, another labor activist was detained in Tehran in relation to Khuzestan’s workers’ protests. Assal Mohammadi, who is a student at the Tehran Azad University, was then taken to Shush and then to Ahvaz by security forces.

A source close to her family said that her family were finally able to visit her after many inquiries initially at the Shush Proseuctor’s office and then in Ahvaz.

There is also no news on a leading labor activist and former head of the Haft Tappeh Sugarcane Factory Trade Union, who was detained 11 days ago in the southwest province of Khuzestan. Ali Nejati was detained on November 29 in his home with reports that he was beaten upon his arrest.