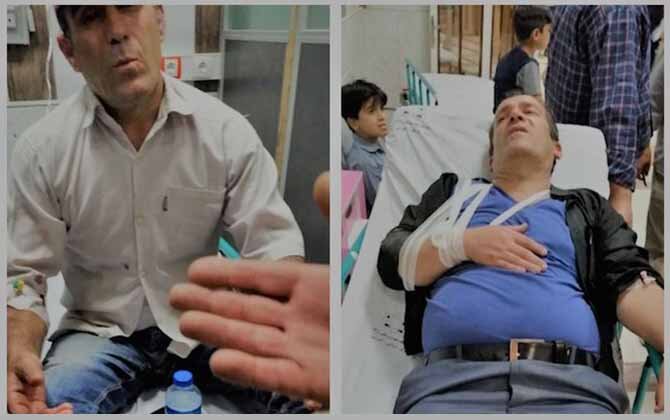 A peaceful gathering of HEPCO workers was violently repressed Monday, September 16, after the state security forces attacked the protesters. Reports indicate that 15 workers were injured while 30 to 40 were arrested.

Workers from the Heavy Equipment Production Company (HEPCO) in the central city of Arak held their gathering for the second consecutive day, protesting months of unpaid wages and the privatization of the company which has left the once productive company in shambles.

The protesting workers were holding a banner reading, “We HEPCO workers are making it crystal clear: Our main demand is the clarification of the company shareholding and ownership status following five years of being left in limbo. We will no longer accept merely a new company director.”

They said that authorities had not kept their promises despite telling them around 10 days ago that they would resolve their demands.

HEPCO Company employees have a history of holding such protest rallies. On Saturday, September 7, they gathered outside the company’s main office building, holding signs and demanding the status of their company stocks/shares be clarified with the officials.

“We HEPCO workers are shouting loud and clear that we are demanding the clarification of our share-holding status and ownership of the HEPCO Company after five years of being left in limbo. We’re not looking for just a new company manager,” the sign read.

It is worth noting that Iranian regime president Hassan Rouhani issued a Privatization Organization statement recently appointing Abolfazl Roghani as the new director-general of the HEPCO holding company.

According to Article 27 of Iran’s Constitution, “Public gatherings and marches may be freely held, provided arms are not carried and that they are not detrimental to the fundamental principles of Islam.”

But peaceful labor activism in Iran is treated as a national security offense;

Workers are regularly threatened, detained, tortured and even sentenced to flogging for participating in peaceful protests demanding their legitimate rights.

ILNA state-run News Agency reported on October 28, 2018, that a preliminary ruling by the 106th Branch of the Arak Penal Court sentenced 15 HEPCO workers to one to two years of prison and 74 lashes for “disrupting public order” and “instigating workers via the internet to demonstrate and riot.”

The workers had protested their unpaid wages and the uncertain fate of the company in May.

Most recently, seven activists were sentenced to up to 18 years of prison for links to protests by Haft Tappeh Sugarcane Factory workers in the southern city of Shush.