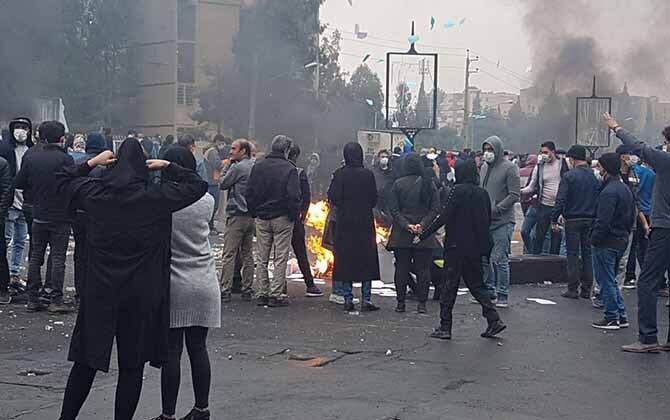 The threat was based on fabricated “confessions” made by arrested protesters.

Kayhan wrote the crimes of protesters is tantamount to “rebellion” and is legally and religiously punishable by the death penalty.

Iranian authorities began to warn protesters Saturday afternoon that they were ready to use force, as Ali Khamenei called demonstrators “thugs.”

“Some people are no doubt worried by this decision … but sabotage and arson are done by hooligans not our people. The counter-revolution and Iran’s enemies have always supported sabotage and breaches of security and continue to do so,” Khamenei said in his Sunday speech.

Khamenei acknowledged the death of protesters in his comments.

#Iran's supreme leader Ali Khamenei personally weighed in today and called the #IranProtesters “hooligans.” He instructed “officials in charge of maintaining security” to “carry out their line of duties.” @RichardGrenell@StateDeputySPOX @leloveluck https://t.co/bcOTLgNiSY pic.twitter.com/UL9Xmt8J21

After his remarks, the Intelligence Ministry said, “key perpetrators of the past two days’ riot have been identified and proper action is ongoing.” The statements might mean that a major crackdown in looming.

Iran’s Revolutionary Guards have warned of “decisive” action if violent protests over a sharp increase in the price of fuel don’t subside.

The regime’s president Rouhani also resorted to threats Monday. He addressed protesters who have closed off the streets with their cars & said “We have several monitoring systems that will identify the license plates and the drivers of the cars.”

At least 200 protesters have been killed by security forces. The numbers are growing fast. Due to the internet shut down by the Iranian regime, the number of videos and reports coming from Iran are limited but what is clear is that the regime has started a brutal crackdown against protesters.

Most protesters who were shot and killed by security forces are young and many have been shot in the head and chest. The regime is trying to hide the extent of its killings. In many cases, security forces have refused to hand over the bodies of the protesters to their families. They are instead buried in unknown locations.