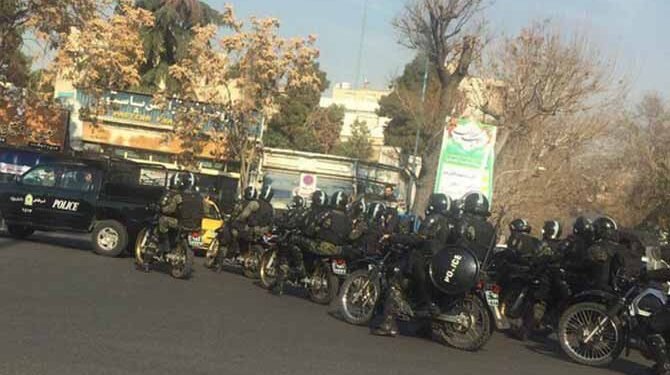 The Iranian regime is getting ready to prevent any protests that might erupt during gatherings scheduled for December 26.

Problems in accessing proxy servers and VPNs allowing access to banned websites have also been reported.

The state-run ILNA News Agency reported today that, home internet networks in some regions in Shiraz have been disconnected. The report said that most ISPs in the southwestern province of Fars were having network issues while some were completely cut off since this morning.

Cellphone networks in the province were also having issues with people saying that they had difficulty opening WhatsApp and Instagram on their phones.

ILNA also quoted a source in the Communications and Information Technology Ministry as saying that cellphone international networks and not internal networks were cut on orders of security officials.

Social media reports say that around 15 cities including in Tehran and the southwestern province of Khuzestan were affected and that people were having difficulties connecting to the internet.

Meanwhile, several videos circulated on social media indicate that the authorities are preparing to prevent any possible protest during ceremonies scheduled for December 26, to commemorate slain protesters.

A large number of security forces and riot police have been dispatched to several cities. Videos circulated on social media platforms showed large police convoys in the northwestern city of Tabriz. Other videos showed heavy police presence in Qazvin, northwestern Iran, the western city of Sanandaj, and the capital Tehran.

Large number of the state security forces are deployed in the streets of Isfahan, central #Iran, as the regime gets ready to to prevent #IranProtests that might erupt during gatherings scheduled for tomorrow, December 26. pic.twitter.com/15Jdm7W61o

The authorities have also pressured families of protest victims to cancel plans to hold 40th-day memorials for victims of the November protests including Pouya Bakhtiari who was shot in the head on November 16. Pouya’s family members and even some of his relatives who were arrested on Sunday are still held by security forces.

The brother of Ameneh Shahbazi who was shot and killed by security forces in Karaj, was summoned to the Tehran Security Police Center on Tuesday evening. The 36 year old women was a mother of three children and was shot to death on November 17.

Ameneh Shahbazi Fard was wrapping the wound of another protester with her scarf, when herself got shot in the neck in Karaj, west of #Tehran #Iran
At the morgue, they said they could not deliver the body to her family. She had 3 children. RIP🌹#IranProtests #StopIranBloodshed pic.twitter.com/hnZNrB5VJH

The regime’s security measures come after widespread calls for nationwide protests for December 26 which marks the 40th day of the death of at least 1,500 protesters shot and killed during protests in November.

Crime against humanity continues with torture of detained Iran protesters