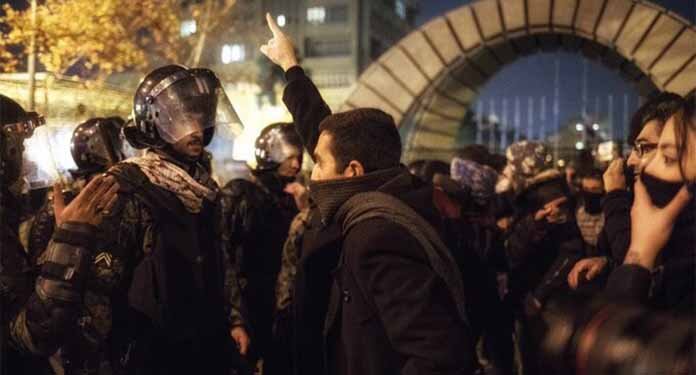 Several people have been arrested in Iran during protests over the downing of a Ukrainian passenger plane.

Gholamhossein Esmaili, the spokesman for Iran’s judiciary said on Tuesday that around 30 people have been arrested for taking part in the latest round of protests.

Esmaili, was quoted by Iranian judiciary’s Mizan news agency described the protests as illegal rallies that had put national security at risk.

“We do not hold back if there are attempts against security,” Esmaili warned.

Among the arrests are university students from Kurdistan Province of Iran.

Intelligence officers on Monday arrested three students of Kurdistan University for taking part in the recent protests. The students, Moslem Soleimani, Arshad Atabak and Zaniar Ahmadpour, were taken to an unknown location.

Student activists at Sanandaj University Moslem Soleimani, Zanyar Ahmadpour and Arshad Atabak were arrested today by the intelligence agents for taking part a ceremony of victims of the Ukrainian airliner. #Iran #IranPortests pic.twitter.com/KQPoZpyubp

In another development, Shora Fekri, a former student activist was arrested in Amol on the same day for attending a memorial service for the Ukrainian plane crash victims.

There has been no news of her fate or whereabouts since.

Shora Fekri, who holds an MA in economy from University of Mazandaran, is a professional poet and mountain climber. She is one of the few women working in Iran in high altitude and doing various restoration works in Mazandaran province.

Shora Fekri was arrested Sunday for taking part a ceremony in Amol, commemorating victims of the Ukrainian airliner that was shot down by #Iran regime.
Authorities have released no information on her whereabouts and condition. #IranProtests pic.twitter.com/2ra9us8OOF

After three days of denials, Iran admitted on Saturday that its military had mistakenly shot down the plane.

Ebrahim Raisi, the head of Iran’s judiciary, issued a warning to protesters, saying “the agents of America and agents of foreign countries” want to use anger over Flight 752 to “compromise” Iran’s security.

Erlier in November 2019, the Iranian regime brutally cracked down

on nationwide protests that erupted on November 16 after the regime tripled the price of gasoline. At least 1,500 protesters were killed, around 4,000 were wounded and injured and 12,000 were detained.