Teenage protester commits suicide after learning of his 10-year sentence 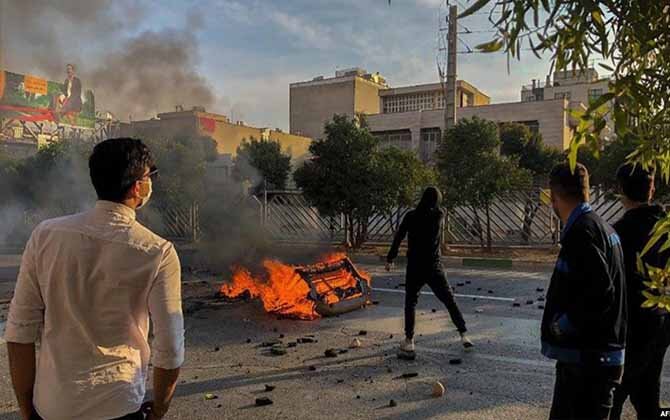 A teenage protester attempted suicide in the Greater Tehran Penitentiary at noon on Saturday, January 25.
Siamak Momeni, less than 18 years old, was arrested in Parand during the protests in Iran in November 2019.
He committed suicide by cutting his wrist after he learned of his 10-year sentence issued by the Revolutionary Court of Tehran for “association and collusion and propaganda against the state, insulting the leader, and insulting the president.”

He was taken to the hospital. There is no news on his condition.
Siamak Momeni had lost his father several years ago, after which he became his family’s breadwinner. He did deliveries with his motorbike and was his families breadwinner. The fuel price hike had deprived him of earning his family’s living.
The teenage protester had told his inmates, “When I learned that fuel had become 3,000 tomans a litre, I couldn’t work anymore. How could I run my family’s life with this price. So, I went to the street and picked up a placard to protest. Then I got arrested.”
He was initially jailed in the detention center of the IRGC Sarallah Garrison, and subsequently transferred to the Greater Tehran Penitentiary after finishing his interrogations.
Parand is a small town in the outskirts of Tehran housing low income families of the staff of Tehran’s International Airport named after Khomeini, the ruthless founder of the clerical regime.
According to Mohammad Javad Kolivand, member of parliament from Karaj, the protests broke out in 719 locations in the country on November 15, the first day of protests.
Seyed Hossein Naghavi Hosseini, spokesman for the parliamentary Committee on Security and Foreign Policy, said around 7,000 people had been arrested during the Iran protests in November.

The Iranian regime brutally cracked down on nationwide protests that erupted on November 16 after the regime tripled the price of gasoline. At least 1,500 protesters were killed, around 4,000 were wounded and injured and 12,000 were detained.

Many of the detainees are under torture and several have died in prison.

The Iranian regime has still not announced the number of Iranian civilians killed during nationwide protests that erupted in mid-November after the regime tripled the price of gasoline.