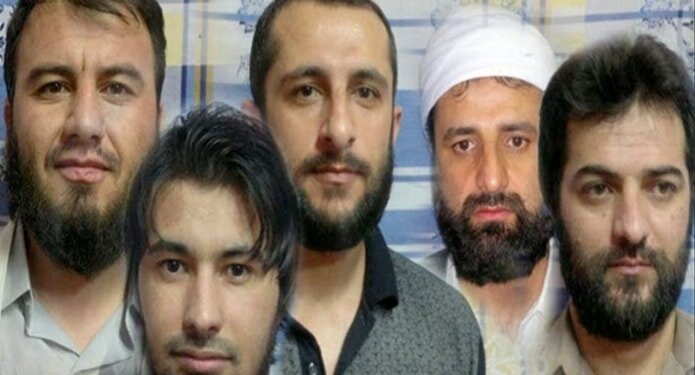 Iran’s Supreme Court upheld death sentences for seven Sunni prisoners after some 10 years of holding them in detention.

The seven Sunni prisoners have been imprisoned since December 7, 2009 after Mamusta Abdu Rahim Tina was killed by anonymous individuals on October 28, 2008.

In March 2015, Branch 28 of Tehran’s Revolutionary Court presided by the notorious Judge Mohammad Moghisseh sentenced all of them to death, but his verdict was rejected by Supreme Court Judge Ali Razini.

After nine years of being detained with undetermined status, three of them were informed of their verdicts on July 8, 2018 according to which Anwar Khezri and Khosrow Besharat were sentenced to 10 years each for complicity in the murder, and Kamran Sheikheh was sentenced to death.

In April 2019, Anwar Khezri, Ghassem Abasteh, Davoud Abdollahi and Ayyub Karimi were taken to solitary confinement in the detention center of Tehran’s Shapour Department of Detection for three days where they were interrogated and underwent DNA tests.

From June 17 to 19, 2020 Branch 15 of the Revolutionary Court of Tehran re-examined their case. Although their lawyer was allowed to attend the court but he was not granted permission to speak out and defend his clients.

Mohammad Moghisseh renewed his death verdict for the defendants and the case was once again sent to Branch 41 of the Supreme Court where Mullah Ali Razini upheld the verdict on February 3, 2020.

The seven Sunni prisoners have protested their legal conditions several times, including by hunger strike.

The seven Sunni prisoners have written letters from prison, explaining they were subjected to cruel treatment to make false confessions against themselves.

Mr. Khosrow Besharat wrote in part, “I was arrested in February 2010 by the Department of Intelligence in Mahabad. I was immediately transferred to the detention center of the Intelligence Department of Urmia where I was held for a whole month in solitary confinement. There, they implemented various forms of torture on me. Very often, from midnight until morning, they created horrible sounds, moaning and screams of people under torture. I was so scared I couldn’t sleep and this was a horrible psychological torture for me.

“They also tied my hands in the back by handcuffs for lengthy hours, such that I cried from pain. I was repeatedly hanged from the ceiling for long hours by my handcuffed hands.

“I was repeatedly tied to the bench and flogged by heavy power cables. The strikes on the soles of my feet felt like my brain was coming off from my mouth, my eyes were jumping out, and my heart was blasting.

“These tortures continued for three weeks. Then, they threatened to arrest members of my family. In such circumstances, when I was under torture and threats, the interrogator wrote down what he was dictating to me and ordered me to sign the papers and put my finger print on them. In those moments I couldn’t understand what was going on and what was I signing. They dictated to me to undertake membership in the Al-Qaeda and complicity in the murder of a soldier guarding a bank who had been run over.”

Mr. Anwar Khezri also wrote an open letter in February 2019 explaining what he had gone through after being arrested. He said in his letter that he had been relocated six times in more than 9 years among various prisons. And his ward had been changed 18 times. He was detained in solitary confinement and quarantine wards 22 times without any justification.

Mr. Khezri wrote, “Obstructions by the judges, intervention of the Ministry of Intelligence in the files, and their coordination with the Prisons Organization” were three sides of a triangle, violating prisoners’ rights systematically.

He also protested the authorities’ forcing them to accept lawyers assigned by them, and added that Judge Salavati had personal problems with his assigned lawyer, Mahmoud Alizadeh Tabatabaii, and for this reason, he kept the seven Sunni prisoners under undetermined status. He also explained the details of his tortures as well as forced and televised confessions.

Families of Iran protesters under pressure to cooperate with regime