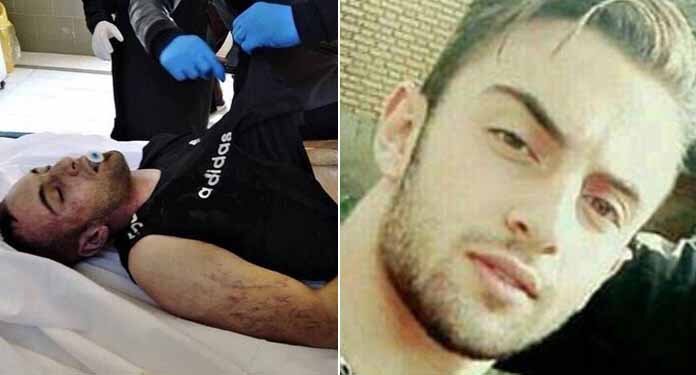 Juvenile death row convict, Danial Zeinol-Abedini, was killed under torture in a western Iran prison before being executed.
In the wake of riots in Mahabad Prison on Sunday, March 29, 2020, juvenile death row convict Danial Zeinol-Abedini and several other prisoners accused of instigating the riots were transferred to solitary confinement.
Danial Zeinol-Abedini was brutalized by Mahabad Prison guards and banished to the Prison of Miando-ab where he was badly beaten up, again.
On Thursday, April 2, 2020, his family were contacted and informed of his death. The body of this murdered prisoner bore scars of beating.
A close associate of Danial Zeinol-Abedini said: “On the night the riots broke out, prisoners intended to break out fearing coronavirus infection. Local forces affiliated with the IRGC who are called ‘Jush,’ intervened to clamp down on prisoners. The forces who went in to quell the riot, were wearing local plain clothes and not military garbs. After suppressing the prisoners, prison guards transferred Danial from ward 6 and another inmate from ward 4 to solitary cells. They were beating them until early morning. At 8 a.m. on Monday, March 31, a van drove them from Mahabad Prison to the Prison of Miando-ab.”
The same source went on, “At 1 a.m. on Tuesday, April 1, Danial called home and said he was in Miando-ab Prison and had been beaten short of killing him. He asked his family to go and save him. But due to the Coronavirus outbreak, the roads are closed and his family could not go to Miando-ab (to file a complaint). At 9 a.m. on Thursday, April 2, they called us from Miando-ab Prison and told us to go collect his body. When we received his body and took off his clothes, we saw that his body was bruised all over and he had stitches in his abdomen. The Coroner’s Office announced the reason for his death as ‘suicide.’ Danial’s father suffered a heart stroke after seeing him. He is presently in hospital.”
Danial Zeinol-Abedini was detained in 2017 at the age of 17 for murder. He was sentenced to death in the summer of 2018.
At least nine child offenders were hanged by the Iranian regime in 2019.
According to local reports, at least 18 prisoners were killed in two prisons in the southwestern city of Ahvaz when prisoners rioted for not being allowed furloughs.