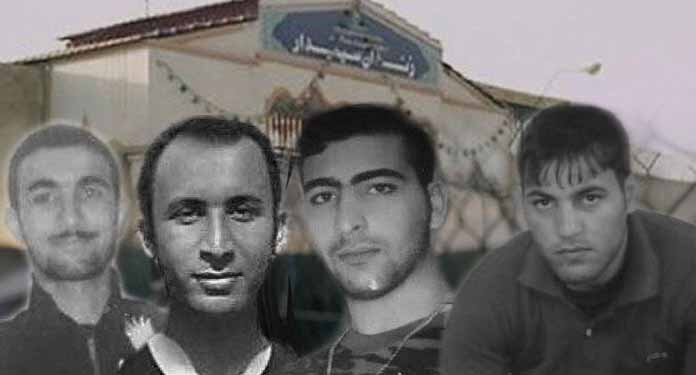 Four inmates who were shot and killed late Monday in Ahvaz's Sepidar Prison after prisoners demanded that they be allowed furloughs in fear of getting COVID19.

A prison riot in two prisons in Ahvaz on Monday left 18 prisoners dead, human rights activists say, as detainees protested sanitary conditions and being denied furlough amid coronavirus outbreak.
Local reports indicate 18 inmates in Sepidar Prison of Ahvaz, the capital of southwest Khuzestan province, were killed March 30 when security forces opened direct fire at prisoners and also as a result of a blaze.
Four inmates who were shot and killed late Monday in Ahvaz’s Sepidar Prison after prisoners demanded that they be allowed furloughs in fear of getting COVID19 are Mohammad Tamouli, 25, Seyyed Reza Khorsani, 38, Mohammad Salamat, and, Shahin Zoheiri.
On Monday afternoon, March 30, inmates of Sepidar Prison of Ahvaz launched a riot. Video posted on social media platforms showed smoke raising from Sepidar Prison that could be seen from a far. Concerned family members of inmates held in Sepidar Prison gathered near the prison to get information on the fate of their loved ones after they heard inmates were killed during the riot.

Mar. 31 – Ahvaz, SW #Iran
Concerned families of inmates at Sepidar Prison gathered outside the prison after they heard inmates were killed during a riot at the prison last night. The cries of a distraught woman can be heard in the video. pic.twitter.com/RNtj47MiCM

There are also reports of several prisoners killed in Sheiban prison on March 31.
Inmates of Sheiban Prison of Ahvaz also launched a riot on Tuesday, March 31. The sound of gunfire and tear gas was heard from inside the facility at 5 pm local time. The authorities dispatched many security units to encircle Sheiban Prison with numerous layers of various forces attempting to both control the situation and prevent any leak of information to the outside world. Locals reported hearing inmates shouting and protest to the prison authorities.
On Tuesday, a local source said, “For a few minutes we could here the sound of gunfire and tear gas from inside the Sheiban Prison, also known as Ahvaz Central Prison. Despite the fact that this facility is located on the city outskirts, regime authorities had dispatched numerous security units to encircle the entire area.”
A family member of one inmate in Ahvaz’s Sheiban Prison said, “I was talking with my father when I heard gunfire. He told me, ‘They’re firing tear gas at us.” Then I couldn’t hear my father and a person near him said, ‘Hold him. He’s not feeling well.’… I don’t know if my father was injured or a tear gas canister landed close to him.”
Further reports indicate that the families of the inmates at Sheiban prison gathered in front of the facility on Tuesday night and demanded authorities to release their loved ones. The regime’s forces responded by opening fire and shooting tear gas at the protesters leaving three people injured.

March 31 – Ahvaz, SW #Iran
Concerned families of inmates at Sheiban Prison gathered outside the prison after they heard inmates were attacked during a riot at the prison today. Security forces reportedly opened fire & used tear gas targeting the family members of the prisoners. pic.twitter.com/hWwKDQiS7d

Other videos show 30 ambulances being shuttled into the facility. According to some reports, the regime’s suppressive forces have murdered several prisoners during the riot.
There were reports of several deaths of prisoners infected with the coronavirus in various prisons across Iran.
Prisoners are demanding that the regime disinfect prison grounds, allow prison furloughs, give sanitary packages to prisoners including masks and hand gels and to quarantine prisoners suspected of being infected with the virus.
There have been several Iran prison riots in the past two weeks, as inmates fear contracting the deadly coronavirus and want to be released. A number of prisoners were shot and killed during the riots.
Amnesty International last week called on Iran to free all political prisoners due to the acute danger of the coronavirus spreading to crowded and substandard prisons.