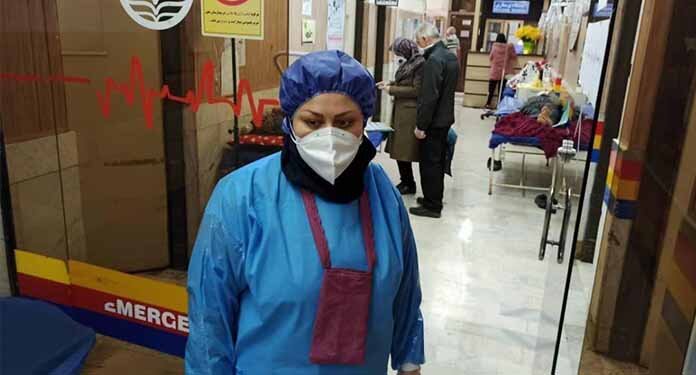 The number of Iranian medical staff who lost their lives to the coronavirus in under equipped hospitals across the country is on the rise. Health workers, including doctors and nurses at the front lines of the fight against the deadly virus, lack basic protective equipment.
According to citizen reports from Saqqez, 40 of the nurses and staff of the Khomeini hospital have contracted coronavirus. Iranian authorities have sent quarantined all of them in their homes without considering their critical conditions.
Due to this decision, one of the nurses named Mohammad Yar Ahmadi, 40, died last night. Yar Ahmadi contracted COVID-19 while treating patients in Khomeini hospital.

In an interview with the state-run Hamshahri daily on April 4, Mohammad Reza Zafarghandi, the president of the regime Medical Council, said, “To date, 170 doctors and nurses in Qom have contracted COVID-19, and 37 of them have died.” Zafarghandi acknowledged, “The entrance of the disease to the country was not taken seriously. If control measures were implemented in earnest, we naturally wouldn’t have been dealing with such widespread contagion of the virus.”
In other provinces, the number of Covid-19 cases amog Iranian medical staff is even higher. On March 20, Abdulreza Fazel, president of the Medical Sciences University of Golestan Province in Gorgan, was cited by the state run Tasnim news agency as saying, “Since mid-February, some 350 of the medical staff of Golestan Province have contracted respiratory diseases suspected of COVID-19.”
On April 5, a group of nurses in Emam Reza Hospital, one of the main medical facilities of Mashhad, had held a rally protesting the use of non-standard masks and equipment. The protesters said that several nurses had contracted coronavirus because of the negligence of authorities and lack of access to standard health masks.
An Iranian lawmaker said on April 3, 2020 that the lack of protective gear for hospital staff and first responders has led to a high death rate among Iran’s healthcare workers.
Speaking to the state-run ILNA News Agency, Bahram Parsaie said that the number of doctors and nurses who have lost their lives is high.
Quoted by the state-run Salamat News website, Mohammad Sharifi Moghaddam, Secretary General of the Nurses Home, acknowledged on March 18, “Necessary measures are not taken to maintain the health of nurses. From the shortage of masks, gloves, scrubs and other equipment to the shortage of nursing staff that has forced nurses to care for more coronavirus patients in hospitals.”