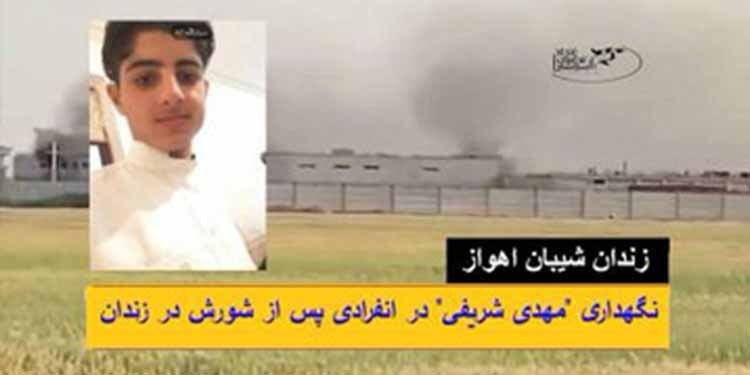 An inmate in Sheiban Prison of Ahvaz has been held in solitary confinement since March 31, after protests over the spread of COVID-19 in the prison.
Mehdi Sharifi, a Sunni prisoner convicted of “security” offences, has been accused of being involved in the prisoners’ protests over the authorities’ failure to address concerns related to the spread of COVID-19 in the prison.
Mehdi Sharifi was arrested in 2017 at the western border of Iran and transferred to Hamadan prison.
A few months ago he was taken to the ward 5 of Sheiban prison in Ahvaz, Khuzestan province where is believed to house over 150 prisoners held for politically motivated reasons, including prisoners of conscience.
A 17-billion-toman bail has been set for his temporary release until the court convince to examine his case, but he could not post the high bail.
Dozens of inmates in Sheiban and Sepidar prisons in Ahvaz were killed during the protests late March.
Following the protests, at least 80 political and civil rights inmates in Sheiban prison were taken to unknown detention centers and solitary confinement , where they have been placed under interrogation and severe pressure. Authorities are using torture methods to force the inmates to provide coerced confessions and acknowledge accusations of instigating these recent riots.
Since March 31, prison and intelligence officials have suspended family visits in Sheiban prison and only allowed prisoners to call their families daily for one minute.
Amnesty International on April 30, raised alarms over the medical condition of the tortured prisoners and the fate of those “forcibly disappeared.”
“Officials continue to conceal the fate and whereabouts of Hossein Silawi, Ali Khasraji and Naser Khafaji from their families after having
transferred them to an unknown location on 31 March,” Amnesty International said.
“At least seven prisoners who were returned to Sheiban prison by 13 April, after also being forcibly disappeared since 31 March, including Jaber Alboshokeh, Mokhtar Alboshokeh, Ali Mojadam, Moieen Khanafereh, Jamil Heidary, Jasem Heidary and Abdolrazagh Obeidawi, have since been crammed into a cell intended for solitary confinement, without access to regular phone calls. Relatives learnt that the seven men embarked on a hunger strike on 23 April. Prisoners held in section 5 of Sheiban prison have told their families that most prisoners in their section are injured and facing new criminal charges for the prison protests,” Amnesty International added.

At least 26 Greater Tehran inmates infected by the novel coronavirus