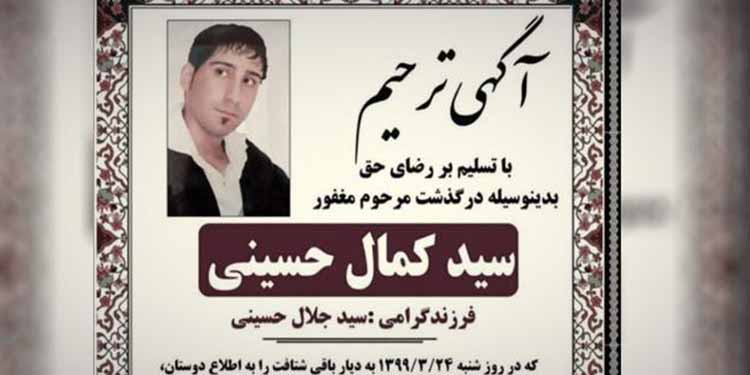 A 34-year-old prisoner in Saqqez, in Iran’s Kurdistan province was tortured to death in the city’s prison, a human rights group said.
According to the report by the Hengaw Organization for Human Rights, prison agents forced his father to write off the cause of death as COVID-19 even though he had tested negative for the virus upon entering the prison.
Intelligence officers severely beat Seyed Kamal Hosseini three days before his death on Saturday June 13.
“On Wednesday, June 10, security agents raided the home of Kamal’s father. They degraded Kamal in front of his mother then arrested him,” a person close to the Hosseini family told Hengaw.
“He was tortured the same day by two agents and transferred to the Saqqez Central prison on Thursday.” The source said he was taken to the Khomeini Hospital at 2 pm Friday, June 12 because of his critical condition from the beatings and torture. He died the next day at 7 am.
“None of the hospital or prison authorities informed his family about his death. Two of his family members went to the hospital, and when they realized he had died, informed the rest of the family.”
Kamal Hosseini’s body was released to his family after 30 hours, only after his father signed a form that said his son died from the coronavirus. The Saqqez Fire Department buried him according to COVID-19 burial regulations without even allowing his family to see his corpse.
The Coroner’s Office also announced Kamal’s death as a heart attack from COVID-19. But his family believes that the autopsy was just a formality and say that their son’s body was only in the Coroner’s Office for 30 minutes.
Seyed Kamal Hosseini was married and had a child.
The death of prisoners under torture is not a rare occurrence in Iran.
In another report, the human rights group disclosed that another young man was tortured to death in the western city of Kermanshah.
The report said that the body of Khalil Moradi, a pharmacy student at Kermanshah University of Medical Sciences was handed over to his family 18 months after his arrest.
The Kermanshah Intelligence officials have claimed that the 32-year-old man was killed in a car accident.
Moradi was arrested the Kermanshah intelligence agents in November 2016 on charges of collaborating with a Kurdish dissident group.
His family had been kept in the dark about his whereabouts until last month after paying money to a government official they found that he was being held in Kermanshah intelligence detention center on unspecified charges.

Khalil Moradi, pharmacy student at Kermanshah University of Medical Sciences, was tortured to death & his body was handed over to his family 18 months after his arrest by intelligence agents. There are numerous reports of #HumanRights abuses and torture in #Iran's prisons. pic.twitter.com/louU799SCo

The Iranian regime has a long history of killing prisoners, especially political prisoners, and practices torture on a regular basis to either contract forced confessions from prisoners or to simply punish them.
Iranian authorities have enjoyed persistent impunity for these serious violations.