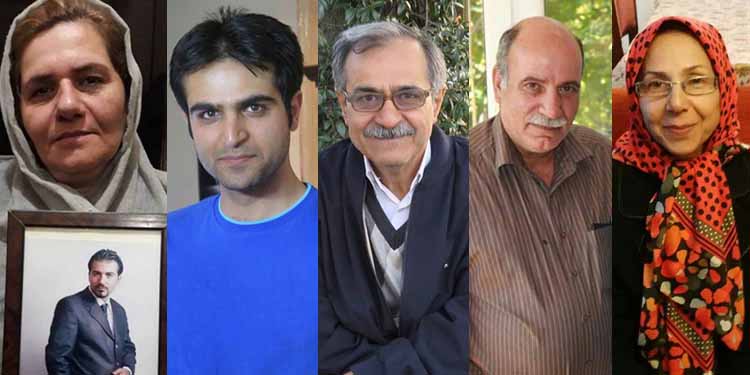 A revolutionary court in Tehran has sentenced seven political activists to prison.
The verdict was issued by the Branch 29 of the Tehran Revolutionary Court headed by judge Seyyed Ali Mazloum.

Farangis Masloumi was sentenced to 6 years, after being charged with “assembly and collusion to commit a crime through contacting the People’s Mojahedin Organization of Iran (PMOI/MEK)” and “propaganda activities against the system and for the benefit of dissident groups”.
If this sentence is upheld at the appeal stage she must serve five years behind bars according to Article 134 of Iran’s Islamic Penal Code, which requires defendants to serve the maximum punishment for the charge that carries the longest sentence in cases involving multiple sentences.
The sentence was issued in absentia for the Ms. Mazloum.

Hani Yazeulou and his son, Houd, were each sentenced to one year, on the charge of “propaganda activities against the system and for the benefit of dissident groups”.

Mohammad Vali Gholamnezhad, Sedighem Moradi, Mehdi Khavas Sefat and Zahra Akbari were each sentenced to 95 days in prison on the same charges.

Hassan Attarzadeh, another defendant in the case, was acquitted of the charges.

Dr. Hani Yazerlou and his son, Houd, Mohammad Vali Gholamnezhad, Sedigheh Miradi and Mehdi Khavas Sefat were arrested on July 7, 2019 by the intelligence agents in Tehran and were taken to the Ministry of Intelligence’s detention center, Ward 209 of Evin Prison. They were later released on bail pending trial.
Dr. Hani Yazerlou is a former political activist who has been arrested several times in the past decades.
Houd Yazerlou also endured time behind bars as a political prisoner back in the 2000s. He was arrested in June 2008 on the charge of “acting against national security”. He was released in 2011 from Rajaei Shahr Prison.

Zahra Akbari Nejad, the wife of political prisoner Abolghassem Fouladvand, was arrested by Ministry of Intelligence agents on July 23, 2019. Two days after her arrest, in a brief and controlled telephone call to her relatives, Mrs. Akbari Nejad announced that she is being held in Ward 4 of Evin Prison. She was also later released on bail pending trial.
Mrs. Akbari Nejad’s husband, Abolghassem Fouladvand is a supporter of the People’s Mojahedin Organization of Iran (PMOI/MEK), who has been in prison since 2013 without a single day of leave and is currently held in Rajaei Shahr Prison in inhumane conditions and deprived of minimum facilities.

Ms. Farangis Mazloumi, the mother of political prisoner Soheil Arabi, was arrested by security forces on July 22, 2019, and was taken to Ward 209 of Evin Prison. She was arrested for defending her son and being the voice of this political prisoner.
She was finally released on bail on October 7, 2019, and was released on bail from Evin Prison pending trial.

Former political prisoner Sedigheh Moradi, 57, had been imprisoned twice before in the 1980s. She is a survivor of the massacre of political prisoners in 1988.
She was arrested in April 2011, and interrogated and tortured seven months in Ward 209 of the Evin Prison. Her torturers tried to force her into making false confessions against herself on the state television. Her eyes suffered damages and her vision deteriorated as a result of these tortures.
In July 2012, Sedigheh Moradi was transferred to the Qarchak Prison in Varamin and spent several months in inhuman conditions and among dangerous convicts. Soon after, prison authorities were alarmed by her positive impact on ordinary prisoners and isolated her from them.
She had been freed on November 23, 2016, upon the ruling of the Revision Court of Tehran.
Sedigheh Miradi’s husband, Mehdi Khavas Sefat is also a former political prisoner who spent from 1981 to 1988 in prison. He was repeatedly summoned and interrogated by the Ministry of Intelligence when Mrs. Moradi was serving her sentence in Evin Prison between 2012 and 2017.

Mohammad Vali Gholamnejad was arrested in 2008 along with his wife Soghra and his son Omid on charges of having links with the PMOI. Mr. Gholamnejad and his wife were both released after their term was finalized.