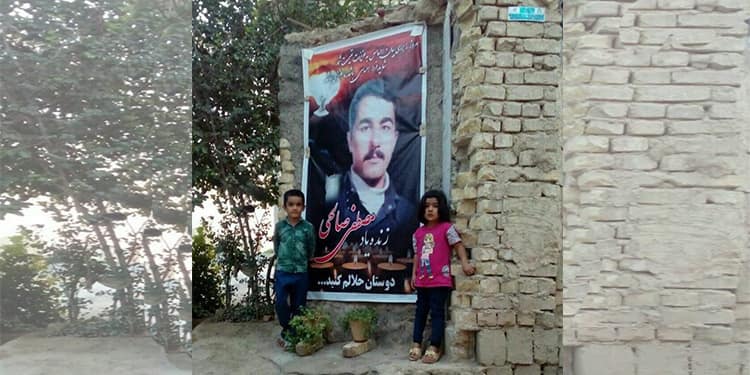 Orphaned children of Mostafa Salehi by his poster announcing his death

Iran’s judiciary has ordered the wife of Mostafa Salehi, a young protester who was recently executed, to pay 425 million tomans as blood money. If that sum is not paid, the house and all properties of his bereaved wife and two orphaned children will be confiscated.

Reports indicate that Mostafa Salehi’s bereaved wife has been summoned to Isfahan’s Judiciary and was informed that they must pay 425 million tomans in ransom for the death of ‘Sajjad Shahsanaei’ and other agents who were injured in clashes with people during the nation-wide December 2017-January 2018 protests.

According to the verdict if this amount is not paid, the house and of Mostafa Salehi’s wife and children, as well as their family garden will be confiscated.

Mostafa Salehi, 33, was a construction worker and also ferried passengers to support himself and his family. His children, Nazanin and Amir Hossein are four and six years old, respectively.

He was arrested following the nation-wide December 2017-January 2018 protests in Kahriz-Sang in Isfahan Province.

He was tried in the 1st Branch of the Isfahan Penal Court and was sentenced to death after being accused of killing Sajad Shah Sanaie, a member of the Basij militia, and beating and injuring six other people.

The interrogators broke his limbs and teeth under torture. They severely damaged his neck and spine to force him into cooperating with the Intelligence Minister and submit to a forced television confession. But he did not surrender to these pressures.

“He did not accept the charges in court and there was no substantial evidence against him,” the person said.