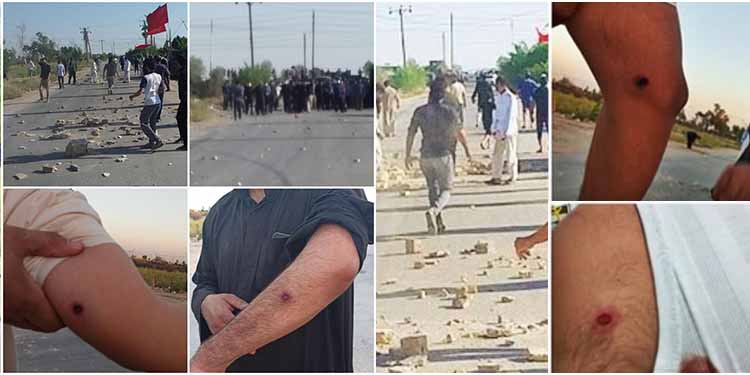 Security forces attacked locals in Hazrat-e Abolfazl Village, with pellet guns and teargas during protests against the demolition of their village on Wednesday.

Locals in the Abolfazl Village in Ahvaz, capital of Iran’s Khuzestan Province were protesting the destruction of their homes and confiscation of their lands by one of Iran’s wealthiest bonyads owned by the regime’s Supreme Leader, the Mostazafan Foundation (Foundation for the Oppressed).

According to local sources, a number of protesters were also detained.

While videos deiminated on social media show pellet wounds on the bodies of several of the residents in Abolfazl, Mohsen Dalvand, the commander of the Ahwaz police force who was quoted by the state-run Fars news agency denied “any shooting at the people of Abolfazl village”.

Meanwhile, in at least one video of the clash in the village of Abolfazl, a state security force agent is seen shooting and the sound of gunfire is heard.

In addition, in other videos, several villagers show what looks like a bullet wound on their body.

Dalvand claimed that the videos were “fabricated by opportunists” and were meant to create a negative atmosphere about the incident on social media.

He threatened those who share the videos with persecution “for disturbance of public calm and security and causing worries among the public”.

The Mostazafan Foundation claims ownership of the lands of the Abolfazl village where 300 families reside.

This is while the residents of the village have a deed that proves they have been living there for 40 years.

The Foundation has told villagers to leave their homes. According to locals, those who stood up to the foundation were arrested.

In a report on August 20, the state-run Mehr News Agency said that the Mostazafan Foundation made this claim a year ago. Speaking to Mehr, the village’s Friday Prayer Imam, Seyed Yusef Mousavi, refuted the claims made by the Foundation.

“This area was agricultural land before the revolution and later construction was done. The revolution began in 1979, and when the Housing Foundation, the Veterans Foundation, and later the Mostazafan Foundation was established, they seized vacant lands in the suburbs and documented them for themselves.”

He went on to point out that the people have revived and settled on their agricultural lands: “Although the current lands have been in the hands of farmers and they have rehabilitated them and even have the right of the root, which was approved by experts in the field of document registration and agriculture, but now the Mostazafan Foundation has claimed ownership of these lands.”

He raised the question of what is the guilt of the villagers that receive no services and said: “If the foundation is really the foundation of the oppressed, it is no more oppressed than these people. The foundation must first prove the legality of its documents, in which case, too, residents are given priority for transfer.

A villager said that all the people in the village were scared to leave their homes. According to him, the Foundation has asked the Utilities Organization not to install utility poles in the village, leaving villagers with a weak voltage.

“The air conditioners don’t work with the weak voltage. We are tolerating the hot and humid weather, and no one is thinking of us,” he added.

A young man, who said his father was arrested, said that the men in his village were mostly farmers, drivers, or construction workers.

“They are arrested like criminals for not leaving their homes… To release them from prison, we have to pay millions (of tomans) for bail. We don’t have any other job or land other than here. How is this treatment fair to us?” he protested.

Another one of the locals said that detained villagers were only released on the condition that they leave their homes. Images published on Mehr’s website showed that some of the homes had already been demolished.

Local authorities have only made empty promises to the villagers telling them they would look into the problem.

In an August 16 interview with a state-run daily, a top Iranian official implied that the Mostazafan Foundation was corrupt.

Ahmad Tavakoli said that the assets of the biggest holding company in the Middle East have been used for officials and regime organizations instead of being used for impoverished Iranians, as was originally intended.

Iran’s bonyads answer only to Khamenei and are exempt from taxes, which leave a lot of room for corruption.