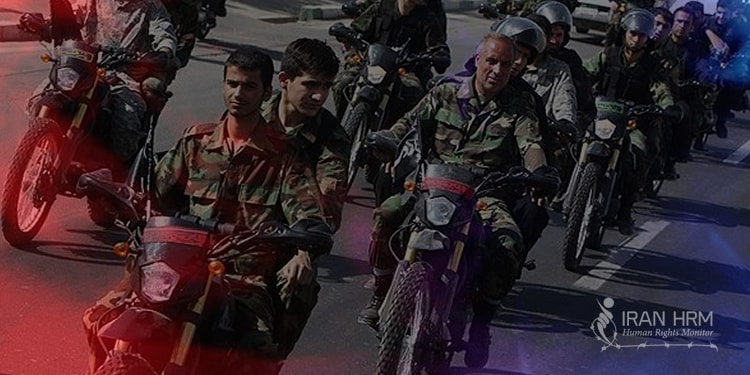 Various regime military commanders have lately come out with announcements indicating formation of new local hit squads, Razaviyoun patrols, and other rapid reaction groups in cities and provinces across the country.

Observers see this new strategy as a last resort response to the outbreak of widespread protests throughout Iran in November 2019.

What was different in November 2019 protests?

Prior to the November 2019 protests, whenever anti-regime protests broke out in one or several cities or provinces, the regime dispatched reinforcement troops from nearby cities and provinces to aid the intelligence services, the Revolutionary Guard Corps (IRGC) and the special units of the State Security Force (SSF) in crushing the protests.

But this hardly worked out in November 2019 when angry protests simultaneously erupted in hundreds of locations across the country.

In fact, November 2019 saw the most widespread anti-regime protests of the history of the clerical regime in almost all 30 Iranian provinces.

For the first time, security services and armed forces of the clerical regime were short of troops to deal with the extensive protests all across the country.

So, to control the situation in cities, the IRGC, the SSF, and the paramilitary Bassij Force decided to set up local patrols in every neighborhood of every city.

The plan is a coordinated effort carried out by the IRGC, the State Security Force (SSF), and the Judiciary.

In a statement on September 15, 2020, the IRGC commander of Khuzestan Province announced that Razaviyoun Patrol units had been launched in Ahvaz and other cities in the Province.

The latest announcement was made by the commander of the State Security Force of Isfahan Province who said special groups had been formed to show quick and decisive reaction to unrests in Isfahan.

Reza Massoudifar, Judiciary director in charge of preventive security measures, had previously announced that the provinces of Khuzestan, Alborz, Isfahan, and Tehran were the hotbeds of protests.

What are the mullahs preparing for?

The truth is that the people of Iran do not want the ruling religious dictatorship of the mullahs. They have been expressing this in various ways and at various times.

The regime’s only response, however, to the righteous demands of the people of Iran has always been and continues to be an iron fist.

The scale of the protests in November 2019 was such that the regime had to dispatch its IRGC forces to slaughter the protesters in order to contain and quell the protests. They killed more than 1,500 in a bloody crackdown.

So, to prevent eruption of any public protests, the regime has launched efforts to set up local hit squads in all the neighborhoods and districts of every city. These local hit squads aim to crush any protest before it erupts in cities, and particularly in the capital, Tehran.

In step with the formation of new local hit squads under various names, the regime has been calling for a tough approach to protesters.

Rouhani lauded the security forces who had cracked down on protesters and crushed the protests. He said: “I thank the Ministry of Intelligence, the State Security Force, the Revolutionary Guard Corps, the Bassij Force, and all the armed and security forces who gave it all to identify and arrest the group leaders who were seeking to damage public properties. They will arrest more people. They must be dealt with according to the law.” (The state-run Bayan-e Ma, November 18, 2019)

Leila Vasseghi, the governor of Qods City, openly declared: “I had issued the order to shoot anyone who would enter the governorate’s building.” (The state-run Bahar website, December 1, 2019)

Calling for execution by hanging

Cutting the limbs of protesters and killing them under torture

On November 26, 2019, in an interview with the state TV Network 1, Abolfazl Bahrampour, a religious expert, had this to say about protesters: “All protesters are Moharebs (persons who have waged war on God). They must be tortured to death. Their limbs must be amputated, and they must be violently executed at the site where they committed the crime, so that no one would dare to do such a thing again.”

He called for “killing under torture, execution by hanging, amputation of right hand and left foot, and banishment” of young people.

As for the killing of protesters under torture and the law that sanctions this, he said: “The punishments for Moharebeh (waging war on God) and for Corruption on Earth, include murder, hanging, cutting the right hand, then the left foot, and banishment.” (The state-run Rouydad24.ir, November 28, 2019)

Execution of detained protesters to intimidate the public

Finally, the regime has been carrying out its threats by executing two of the detained protesters.

On August 5, the Iranian Judiciary hanged Mostafa Salehi, 33 and a father of two, who had participated in the protests in December 2017-January 2018 in protest to high prices.

On September 12, they hastily executed Navid Afkari, 27 and a wrestling champion, for participating in the protests of Kazerun in August 2018.

The international community needs to react to the Iranian regime’s plans to slaughter and massacre Iranian protesters for demanding their legitimate rights. They must not do business or negotiate with murderers of the people of Iran.